Cant find the one for Mac

Sorry, I don’t speak Mac. I was under the impression Darwin was the Apple internal name for macOS… is that not right?

In any case the executables listed for this release are Win x64, Win ia32, Darwin & Linux.

Expand the Assets triangle and you can see the two magic terms, Mac and dmg.

Expand the Assets triangle and you can see the two magic terms, Mac and dmg.

Ah-hah! Thanks for that.

So can someone explain to me what’s new in this version ?

The one thing that continues to bother me about Aillio’s beta software release program is the absence of telling the Users what was changed, fixed, etc with each release. That should be standard practice for helping those that are willing to participate in Betas to understand what they are testing.

Asking people to risk non-performance and help test beta releases without knowing the level of changes made is frankly immature development thinking and should be corrected. It doesn’t take a lot of effort to jot down the highlights of changes, but it does take the willingness to do so.

Agreed, a change log is de facto for most dev work.

Operating 2.4.0-beta for the first time. I see that you have fixed the misalignment on Windows screens of the mouse pointer and the markers on the curves. THANK YOU!!!

Something new: when looking at the chart while roasting, the vertical slider/elevator pops in and out when set to full screen. Seems to do it on its own. Goes away when I reduce the screen size a tiny bit as the slider stays all the time.

Dunno what else you guys addressed but my biggest whine has been fixed.

Edit: In Windows, the content of the Roasting screen doesn’t seem to fit the available area of the window, i.e. there’s more content than there is window area. This includes the slider at the bottom which isn’t viewable at all (at least that’s what I think I have a glimpse of).

I’m getting random “garbage” data in the INFO panel, like number of roasts, serial number etc… 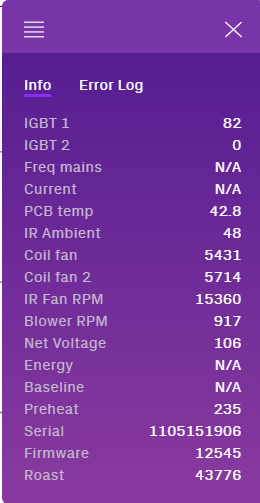 I’m getting random “garbage” data in the INFO panel, like number of roasts, serial number etc…

I see something similar after updating f/w and was able to resolve it by resetting the USB a couple times, i.e. unplug/reconnect.

Like you I’ve only seen this with f/w update, but… ?? I did notice I had an Error Log of 4 items after this RT (only) update. Unfortunately I forgot to copy it to the clipboard before shutting down for the day.

Dunno what was the target fix but I got no entries in the Error Log.

1- The Roast window is still jittery as the vertical ‘elevator’ slider pops in/out. It is caused by the IR Bean Temp display in the right-hand upper display box. When the IR temp exceeds it’s allotted space it causes that box to extend downward by one row of text and that apparently exceeds the display capacity of the window causing the slider to appear.

2- Using an Overlay, the progress bars of Power/Drum/Fan events fall behind the live chart and are very misaligned relative to Time. Toggling the Overlay off regains (most?) misalignment, but when the overlay is toggled back on, the error reasserts itself.

Is there a change log for this alpha? Fixing the misalignment of mouse pointer and the markers on the chart is an obvious change (and much appreciated!!), but are there other changes?

I noticed last night (on 2.4.0 beta) that, during my soak (at P3) the “control settings” display under the graph showed up as P0, though the slider on the left and front panel of the bullet itself reflected the “actual” setting. Oddly enough, after the recipe I was running raised the power to P9, the “control settings” graph for the portion of the roast from charge to the point where the recipe again lowered the power shows up at “P9” rather than “P3 from charge to 1:00, followed by P9”. No idea what that’s about, and everything else looked okay aside from @bab’s issues above.

I`m having a same issue on my Mac. The vertical slider pops in and out. I cant seem to fix it at all. Kinda annoying…

I`m having a same issue on my Mac. The vertical slider pops in and out. I cant seem to fix it at all. Kinda annoying…

It’s outside your control. It’s happening because of the resolution of IR Bean Temp. I think I see as many as 2 places beyond the decimal (which is probably 2 too many).

I have a request for the the chart display during roast-

3- Please allow us to set a fixed resolution for (at least) the Y- (temp) axis on both the left and right sides of the chart. I don’t see any benefit to increased resolution during the early heating phase, but if there are those that need it, then I guess we need both auto & fixed. I’d prefer to look at a display that isn’t changing while I’m trying to get a sense of the slope for temperature.