Save overlay with roast

I did my first manual roast with an overlay tonight. On the roast screen I can see the roast and the overlay, but when I went to another machine and pulled up the roast the overlay is gone. Is there a way to save the overlay with the roast? Without that there is no way for me to adjust or make a recipe, because I cannot tell how my roast differs from my target profile (the overlay). Here is an example of a screenshot of the roast with the overlay. I need to save this in Roastime. I can do this in Artisan Scope, so if I can’t do this in Roastime, how can I export these curves to Artisan? I tried this in the past and found it very confusing. 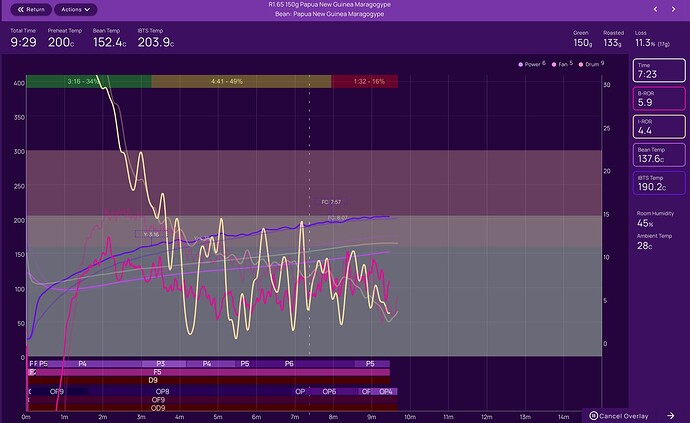 I feel in Roastine 3, the use of overlay is clunky.

Would be nice to be able to save a few reference curves, and be able to overlay two roast curves even.

But yeah, would be nice to have a switch for even just one reference curve for a quick and easy way to get things moving. I think manual roasting is more fun, but having to search and find the reference curve, open it, click overlay, but then stop the overlay if you need to choose another one….

…idk, it just all feels clunky. better than nothing sort of feel to it rather than a mature feature.

So, if they could make a reference curve check box that we could save or load our standard roast profile, that would be interesting**, but a drop down box with the option to store several references would be better.**

ok ok ok, we know there are recipes, and some features on roast.world that make some of my suggestions sound like complaining instead of learning the gear, but this is a developing product, and i’m just giving honest feedback. It isn’t like they could predict every way users would end up working with the product or what all our preferences might be.

I like these ideas and I am going to work on getting it added in the next couple versions.

Also, RT4 is an open beta right now. A stable version will be released soon. We will try to get this for that release.