I am seeking some advice regarding smoke reduction in general, and smoke and government/council regulations in South-East Queensland, Australia (for the other Brisbanites in here).

I will be picking my Bullet up next week, and I had a meeting with council reps this week regarding a food license, as I am hoping to turn this into a bigger hobby/mini commercial pursuit.

Their stance is that coffee production is considered food manufacturing, and so any roasting has to be done indoors. Okay, so I say that the solution I’ve found for this roaster is venting, and guiding it to release air/smoke upwards, to minimise any upset with neighbours.

I do roast light to medium, so it’s likely that any smoke will be minimal (not including the seasoning roasts).

Their response was that I would be releasing pollutants into the air, and thus be subject to disciplinary actions by the Environmental Protection Agency (EPA) should I be reported. They said that Brisbane residents are usually quite conscious to smoke and smells from their neighbours, so it would just be a matter of time before that would happen, according to them.

They also mentioned afterburners a good dozen times or so, but I am not looking at getting old of those darn things, due to cost to purchase, run and maintain.

I have done a fair amount of research on this, and it seems there’s two camps for solving this:
The venting the air/smoke outside your home, either directly by roasting outside, or using ducts and other items. I can’t do that, as it is considered ‘polluting the air’ by my local council.

An air purifying solution. This then goes in all sorts of directions, from fume extractors, to electrostatic filters (and HUGE COST there), to carbon filters, and the list goes on.

So I am hoping that there is a solution with individuals in this community, to cover both the smoke/chaff as well as the odour production, with the air that is released from the bullet when roasting.

Hello, I can tell you something about my experience, until a week ago I was in the same situation.

I live in France in a small town (60 people) I started to roast commercially with my Bullet and on a good day I can roast more than 15 kilos in one day.

When I roast about 4 kilos back to back, there is a distinct smell in the air, which the most ofmy neighbors love, a smell of fresh homemade cookies.

But a neighbor who hates coffee, began to make problems and complain, while she was kind enough and didn’t do something legal, she could have make a legal claim.

I started looking for solutions, and the best in the long term is the afterburner.

I end up renting a garage where the smoke isn’t annoying no one because is quite isolated.

Thank you for your quick reply. I was sitting on the idea of a carbon filter, and your experience about it easily clogging up is fantastic, thank you.

How is your garage operation going? It sounds like you are hitting your stride with the amount you are able to roast each day.

Thank you, and greetings from Australia!

I just got my roaster and am experimenting with an inexpensive non-vented range hood. The hood is about 20 inches above the roaster and has a pair of carbon filters on the fan but the hood is not vented to the outside. I don’t know yet how long the filters will last but they shouldn’t get clogged with chaff because of the distance from the roaster (and I don’t see any chaff coming out of the roaster exhaust anyway). 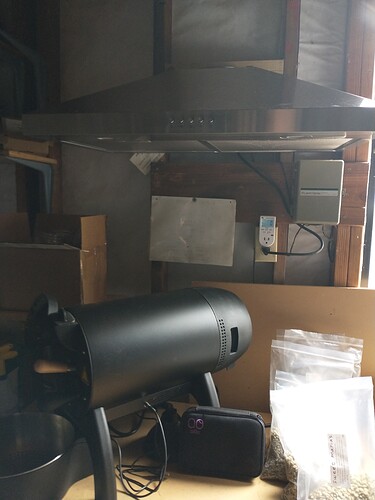 @peter_borthwick I am based in Canberra and have gone through this process recently and about to go through it again as we are moving house.

ACT Govt require me to obtain a food license if I am producing coffee in commercial quantities for sale to general public. If however, I am producing for self use, friends and family apparently I can produce as much as I like as long as there are no complaints from neighbours

.
I checked with 9 immediate neighbours and none had smelt anything, and if they did they thought they would enjoy the smell of coffee. If I am to stock my product on the shelves in shops however, labelling on bags was required to reflect recall process and contact info. I could also reflect origin of ingredients and manufacturing as “Australian Made” although not compulsory.

I proceeded with Food Permit application, had an inspection of roasting premises in garage done (must have access to water & sink for hand washing) and with a few suggestions on storing food prep equipment in sealed containers to minimise rodent/insect contact they were ready to tick.
Then Environment Office got involved and despite neighbours statements of support, they wanted me to lodge a Development Application on the premises to reflect food prep business and existence of emissions. As we were house sitting I was not prepared to do that and requested a temp permit to get me going with a view to undergoing full Food Permit and DA when we were in long term premises. No response received.
I considered moving to a small warehouse space across the border in Queanbeyan NSW and their Council was much more receptive. Tell them what I am doing, what equipment I am using and how any food products are handled and hygiene maintained and they would provide interim approval as coffee considered low risk food item, until full inspection could be made. Warehouse was however, an expensive option and I did not proceed.

I am just about to move to a 12 month lease house with garage to be used as roasting facility. Advised agent of intent and discussion next week about getting Food Permit inspection and DA before being locked into lease. Suspect I will be looking at exit clause if DA not approved and beginning the rent now which is fine, but wary they lock me into a 12 month lease and no exit clause if Permit not granted.

On environmental issues, relevant officer was sympathetic that roaster didn’t produce anything dissimilar to a BBQ or wood fired pizza oven and was happy to assess on that basis. Discussion on ducted extraction methods, exhaust fan and air purifier/ioniser solutions to come pending inspection and approval.

Having worked with afterburners, I would be steering completely clear in an urban residential home based environment. They are okay if in warehouse/commercial space or rural type environment but I reckon just too hard to get approved residentially. They still put off some odours/smoke, and fire risk is a bigger issue than smoke emissions.

Hi Snidely_Whiplash and chris.whitewrw3, and thank you both so much for your input.

I was able to have a very big chat to the Aus distributors for the Bullet, and they put me onto a fume extractor, called the Hakko FA430-15 Fume Extraction System. I found a few sellers in Australia who carry it, and ordered it and it just arrived today! Hoping that will help quell any concerns from government, and this is just a hobby until I expand things somewhat!

hey Peter, how did you go with Hakko Fume Extraction System? Does it have any specs on what output levels it reduces to?

I didn’t look that up to be honest, and to think I dived as deeply into the topic as to come across that info.

So far it’s been great. I usually pull just before second crack so not much smoke is coming out of my roast, but I go close to there at times. On low to medium on the Hakko, it’s absorbing all of the smoke.

The first 3 roasts to season the drum did use up the first filter layer (it should last another dozen roasts or more).

I have now gone through the Food Permit process again for new rental house and Coffee Room at back of house. Food Permit inspection by ACT Health all passed okay, but despite previous advice, was referred to EPA who said they would not recommend any such business in residential area, and that I would need to submit a Development Application for change of use on house.
ACT Planning then advised they were the approval body and would not require a DA, but I would need to prove I can satisfy Environmental Code/Act. I have contacted several Enviro Consultants and fees are estimated at $5,000 to $10,000 to do Air Quality testing and have samples analysed. Beyond this little start up so writing this week to seek clarification of any other way forward with Planning Dept.

Looks like it will just be easier to buy a van/trailer or lease a commercial site. Bugger!!!