I believe I found an option for hearing the cracking sounds pretty clearly. Like most, it’s difficult to hear the sound of the FC over increasingly popular and faster drum speeds. I don’t know if anyone else has tried this approach. I have been experimenting with an inexpensive product called a " Voice Amplifier for Teachers / Amplifier Speaker with Portable Microphone Headset". This is used as a very small and inexpensive tool for public speaking and small auditorium or classroom settings. It is designed to be clipped on your shirt. It amplifies the sound of your voice rather impressively. It comes with a small speaker amplifier and a microphone headset 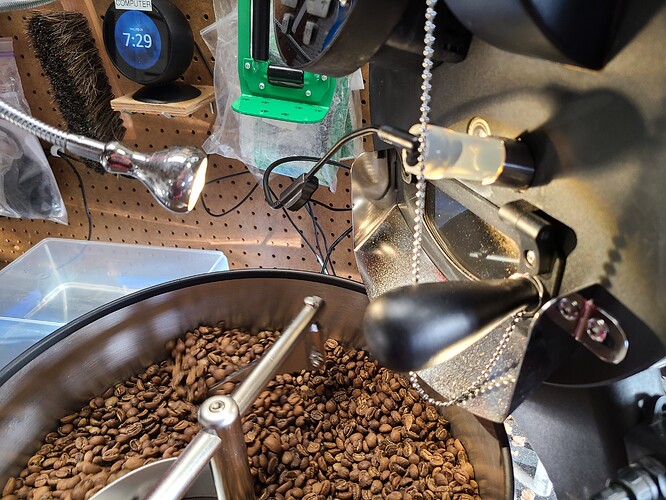 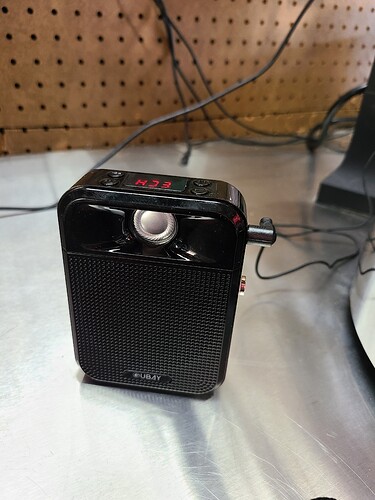 No pun intended: sounds good. Have any links?

A couple years ago I recall someone successfully trying a modified “mechanics stethoscope” originally purposed for hearing internal engine sounds. That requires shifting your focus to handling another piece of equipment specifically to hear. Though you can hear much better with the stethoscope, I just tilt the rubber stopper on the bean chute so I can get the sound of the crack a little better. Your approach, however, can play in the background without having to occupy my hands or attention while I’m watching the roast.

If it works as well as I suspect, then the way to gild the lily will be to use audio spectral analysis s/w (created for analyzing bird calls) to enhance the sound for the 2 different cracks. If that s/w can be pre-tuned to the frequency of 1C or 2C (they’re a little different) that should emphasize what we want to hear. I was using this setup to calibrate my ham radio receiver audio section; no idea if the s/w is still around.

Wow… tuning to that specific sound frequency sounds (redundant again, Ha) awesome. I’ll edit my post to include links for the amplifier and silicone hose. There are lots of different amplifier models and price ranges. I just bought a cheapie to try it out. Seems to work fine. Thanks for your feedback.
Steve

I just found there are at least a dozen spectrum analyzer apps for Android & probably iPhone. This may turn out to be easy to evaluate the possibility. Yeah, I’d appreciate the links for what you bought.

I’ll roast tomorrow and I’ll give the analyzer app a try on my Android using unamplified sound (noise!) via the built-in mic. The spec analyzers for bird calls have s/w filters to kill background noise which might help with the background sound from the beans in the drum. Or not.

Where did you get the agitator?

I bought the bean cooler from a gentleman in Taiwan. Pretty pricey, mainly because of the shipping costs. But it’s an all 304 stainless work of art. He also has the stainless bean deflector that fits perfectly.
You can email him for the details at [email protected]. I’ve also attached a link to the Utube video.
Steve
https://www.youtube.com/watch?v=yth1U-6AL34

Thanks Steve! You rock

Hey Bruce, how’d your experiment with the spectrum analyzer go?

The trial run was a total flop. I couldn’t recognize any difference between when beans were crashing around and when beans were crashing around during 1C. If I’d recorded the sound I could have fussed with settings later. It didn’t help that I couldn’t identify where the phone’s microphone is. What I thought was the microphone (near where your mouth would be when speaking) turned out to be part of what the phone uses in speaker-phone mode.

So I’m going to try recording a sound clip that I can loop on and study it with a bird call analyzer (those apps often have some suppression capability).

In the mean time I ordered some silicone tubing and short tubes to mount something in the tryer port to properly orient a microphone (one that really is a microphone!). Essentially what @steve.jungers put together above but it will have record capability (I think it records! Manual translations leave a lot to be desired).

Instead of trying to eat the whole elephant at one time I gave up and will do this in bite size chunks. I bought the little amp/speaker, silicone hose, a separate microphone and some straight 15mm tube.

I put all that together and gave it a try today. It works to amplify the sound from the drum and that means it also amplified the noise and in this case noise = anything that isn’t 1C or 2C. But the sound of the crack was distinct so it helped quite a lot with 1C.

2C turns out to be a little more illusive as the acoustics of this setup cause 1C to be largely the same as 2C as the sound leaves the little 3" speaker… both have the same crack sound though 2C is a little bit quieter. When I listen to the sound directly by tilting the rubber stopper on the bean chute, the sound of 2C has the sound of a snap and is distinctly different than the sound of 1C which is literally the sound of something cracking. I guess the issue may be the fidelity of assembled components which limits the higher frequency components of the 2C snap but includes the lower frequency parts that are similar to 1C though not as loud.

Next I’ll try to figure out the integrated recorder so I can save a sound clip of 1C and another of 2C to play thru a tunable audio spectrum analyzer on my laptop (post-roast).

Is that a relevant topic for you, do you really roast until 2C? That would be too dark for me, even for espresso.

This is what I use works great

The little one I stopped using, silicone tubing is attached to the metal part.

Is that a relevant topic for you, do you really roast until 2C? That would be too dark for me, even for espresso.

I routinely choose beans beans that respond well to a dark roast. So yes, picking out the sound of 2C is important for my needs.

This is what I use works great

The little one I stopped using, silicone tubing is attached to the metal part.

@timcmillen2knj From the pic I’m not sure what I’m looking at… are these microphones? And you connect via the tubular end to a silicone tube which is inserted into the tryer port? I assume you’re not using 2 mics at the same time, but… ??

It’s a stethoscope, the metal part with the cooling fins go into the tryer port.

So- for direct listening then?

Yes, direct listening. Works great I can hear different levels of first crack, some are loud some much softer but still hear able.

Any way you’d be able to post a clearer picture of your set up for this? Thanks! I am not sure how this all “hangs together” looking at your picture, and what is the “cooling fins” you referred to in your post with the picture. I am intrigued about using a stethoscope as a solution.

Here is a better pic 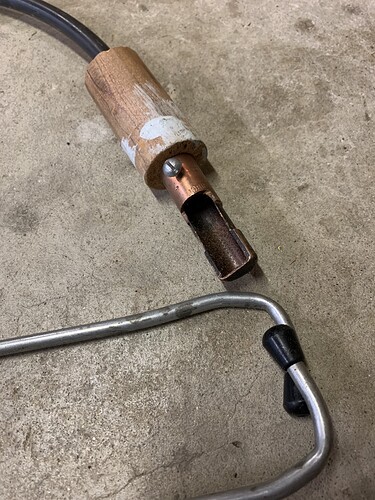 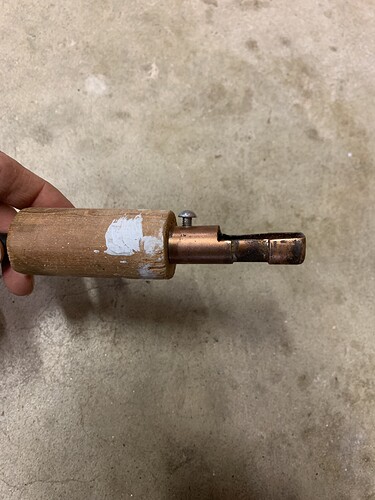 IMG_54693024×4032 2.25 MB
1/2" copper pipe with a cap, cut out the trier groove, used an old closet clothes rod dowel, and put my old mechanics stethoscope on it. Can hear FC even on decaf now. But… one of these harbor freight stethoscopes with the tube placed just under the drop door where all the chaff falls out, works about 85% as well. That way, you can leave your trier in.
1 Like
next page →