Sweet Maria’s posted a video and roast profile for their Polar Expresso blend:

https://library.sweetmarias.com/bullet-roast-profile-video-sweet-marias-polar-expresso-holiday-blend/
In the video, Dan explains his reasoning for his profile.

It is a big departure from the way that I roast this blend. I will be interested to try his profile and see the difference compared to my profile.

Here is the link to Dan’s roast profile:

They are talking about doing a series of roast profiles for the Bullet.

I looked at it when I received their email this morning. The first thing that jumped out at me was the slope of the RoR curve. So much for an constantly decreasing RoR ! ! As is so often said, it’s how it tastes that matters. Let us know what you think after trying their recipe.

I looked at it this morning and it didn’t surprise me Dan went with a long heat soak at P5. This is along the lines of how Julio (also at SM) did with his roast on the Bullet that won some prize (Bruce has the link to that profile I believe…I can’t find it). I couldn’t tell from the screen shot in the article what batch size he did, if that was 1kg or not. I was surprised with the D5 thought.

I was thinking about the Julio profile and how it was similar.

If you watch the Video with Dan, he explains why he chose some of the settings that he used.

He specifically takes the beans into account when selecting his parameters:
“Considering the varying density levels of the blend ingredients (the El Salvador is a lower altitude, less dense bean than the two Ethiopian ingredients), I chose to take a relatively slow-and-low approach, hoping to find some equilibrium in the drum. I also tried stretching out the time between the start of first crack and finish, by dropping the temperature input, in order to round off some of the acidity that the Ethiopian components bring to this blend.”

I used up the last of the Polar Expresso last week before seeing the email from SM.

I have ordered some more Polar and will run it using Dan’s profile.

I have a little of SM’s Liquid Amber Blend. I may try Dan’s profile with that blend.

I did a couple of roasts with some beans that I had on hand.
One was the Liquid Amber from SM and the other was an espresso blend that I got from Happy Mug.

At D5, the drum is too slow to get any beans in the tryer.

It will be a day or two before tasting. (okay, tomorrow…

Yea… the D5 was interesting. I had tried D6 with 1kg once or twice and felt it wasn’t moving the beans enough with that amount of beans. Looking forward to how it turns out!

What is the practical effect of a slower drum speed, anyway?

Dan said turning the drum at D5 allowed the beans to spend more time in contact with the drum and therefore transfer the heat more directly:

"I often use D5 as a starting point when roasting a pound of coffee. Not too fast, not too slow…it keeps the coffee moving but allows the mass to stay in relatively close proximity to the heat source. I think it could’ve used a bump up toward the end to help remove some of the chaff! We will try to include more information in future videos too, and I’ll try to lay out some of what went into the roasting decisions in a short blog post on our website. Hope to have the next one up in the next couple of weeks"

Hey all, Dan here. Just thought I’d chime in on the thread. Glad to see some folks are viewing the video!

I’m happy to answer any questions about the roast, and also appreciate others sharing their experience roasting this blend, or just general observations of how they’d do things differently. I’ve owned a Bullet for some time, but don’t use it nearly enough, and have really benefited from lurking on the board for roasting tips of others. Most of my roasting experience is on either sampler roasters (much smaller capacity), and a Probat L12 (MUCH larger capacity!), so I’m constantly finding myself unlearning old habits that don’t necessarily transfer to the Bullet.

Anyways, nice to see the thread.

Thanks for joining the conversation Dan and thanks for sharing your profile/Recipe.

Thanks for joining with us, I have checked this blend’s roasted profile, and compared to Sweet maria’s description for the blend, there there is a potential of berries hint and lemony bright spot. Did you notice them in your cupping!?

I am asking cause your profile as I understand will be more into heavy body classic espresso with dark chocolate and maybe brown sugar with absence of any fruity notes. Correct me if I was mistaken.

I worked on modifying the recipe to try to duplicate Dan’s roast profile with 250g of beans. about half a pound so that I don’t waste too many beans. I think that the recipe is pretty close now.

Tomorrow if I have time, I will try a few roasts changing just one variable at a time.
The first roast will be as close to Dan’s as possible with a smaller amount of beans.
The second roast will be the same with the exception of changing the drum speed to D9 to see if the cupping shows any difference.
The third roasting I will try to do one of my typical roasts for an espresso.

I really prefer being able to taste different variations side by side.

I guess I am showing my age. I am still building truth tables.

I have a pound of this from their sampler to work with. I’m interested to hear your results.

Hey there, thanks for the question! You’re absolutely right . I was aiming to flatten out acidity and develop the chocolatey low tones by dragging out the roast a bit. The gentle curve was intentional. Even so, I still picked up on some really nice citrus notes amidst the layered chocolate flavors, though more like candied orange peel rather than actual citrus juice. Body is incredibly creamy at almost any roast beyond City+, and my roast was no exception! Hope this answers your question.

Bill, please do report back if you follow through on running those different roasts. I saved a lb. for over the holiday weekend and would love to hear how yours turned out.

I did 2 roasts using 250g of green beans on December 20, and only changed one variable: the drum roatation speed. The first batch I used D5, the second batch I used D9.
I matched Dan’s profile pretty well.

If you click on the image below, you can see Dan’s profile in light gray 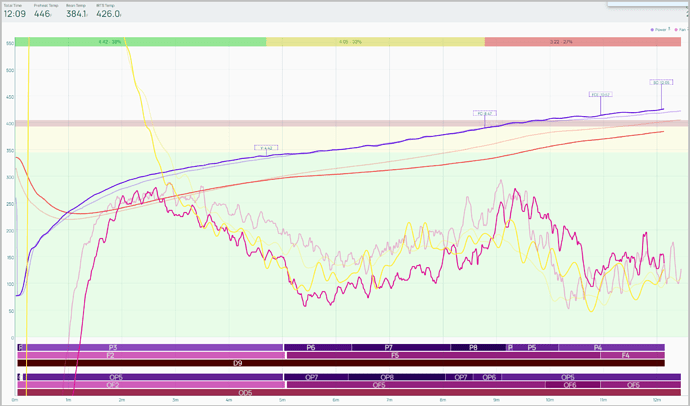 I just did my first cupping after letting the roasts rest for a few days.

For this cupping, I used my Jura Z5 Bean to cup (super espresso maker) with reverse osmosis water with Third Wave minerals added in. 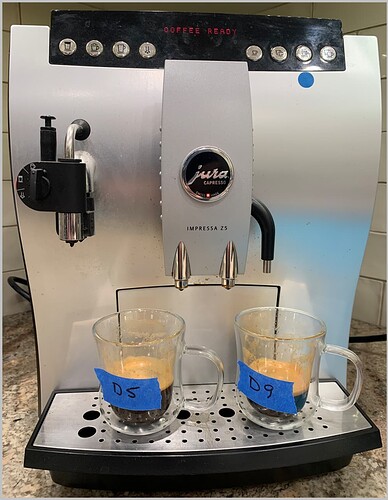 18g of ground coffee, 60 grams of espresso in the cup (not quite a lungo)
After pulling the shots, I stirred the shots with a spoon.

I wasn’t expecting much of a difference between the cups.

The Crema on the D5 was a little lighter in color. Just a touch more spice on the nose.
A little more acidic (sour) on my first slurpee sip.

The crema was darker on the D9 (opposite of what I was expecting)
There was just a touch more body in the D9 shot.
The crema lasted longer on the D9 shot: All the way to my last sip at room temperature.

So overall there was very little difference, which is what I expected.

I need to roast a couple of more variations and then do some more cuppings.
This time of year is difficult for me to get some of this done.
I am the house chef and am getting the big meal ready today. I had pies in the oven at 4:30am and had time to do this first test.

Both cups were very enjoyable.

I am going to run the same test with Sweet Maria’s Liquid Amber blend and see what the results are. They just announced that they had it back in stock, so I ordered 10 pounds.

(What’s another 10 pounds, when you already have over 200 pounds of beans from all over the world waiting to be roasted? LOL)

I took a few of the odd lots and leftovers and roasted them and labeled them: “Bill’s Christmas Blend” and will give them out as holiday friend gifts.

Crema is CO2, right? So the faster drum speed has the effect of trapping more CO2 in the beans? Interesting.