Hey everyone. As you can see the roast of this natural Brazilian (a classic Brazilian profile) was less than 8:30. I was aiming for around 11 minutes since I planned to develop it a bit longer.

I would argue maybe that I should lower the preheat in order to achieve longer time frame, but I’m pretty sure it wouldn’t be too good to go lower than 300C for 900g of coffee, huh?

Any recommendations? Additionally, all my roast seem to be quite short and the first crack happens way to early, around 7:30 - similar as you can see on the attached graph. A short roast like this would work for a funky light roast, but not here, right?

I am currently only roasting 910 gram batches and I have had success with charge Temperatures as low as 240. A quick caveat is I have only been using washed coffees so far, but my favourite roasts have had 240, 250 or 260 charges with a short 30 second soak at P0. (whether the soak does anything remains to be seen, I just feel bad hitting the seeds with P9 out the gate without making it feel comfortable first lol).

The lower charges have resulted in some very juicy cups. I have yet to understand why some higher charges, for me, can either be juicy or have a certain “dryness” to it. I watched Nikki Amouris “tasting the roast curve” video on YouTube and have been down that rabbit hole lately. 75 degree turn with a max peak ROR of 19. When I hit that it seems to texturally pay dividends.

That’s an interesting take, I’d never thought about going so low with a preheat. In the past I was doing 290 for 900g and those roasts were good. I raised the PH because some people in Aillio FB group recommended I should probably do that. I’ll probably go back down to 290.

And how long are your roasts with these PH temperatures? You’re aiming at light roasts?
Post graphs if you have them

@rjavitukan My 1kg roasts starts with PH of 572F/300C and even with that high charge temp my average time is in the 14 mins range. I tried once to start at 590F/310C but I didn’t like the results so much, not that the beans were scorched but that the flavor was just flat.

@burlchester I took a peak at your recent Jun 5th roasts on R.W. and your approach for the 900g is fascinating, not only with a lower PH and the P0 but also your use of D5 all the way thru. I having been toying with the idea of heat soaking a bit at the start of my 1kg roast with a P5 or P6 and F2 (instead of P9 and F3) for about a minute, but the part I still don’t quite grasp is the impact of drum speed with this much beans esp one that is as low as D5 that you’re using. Would like to hear your rational or theory on that. How did they cup? 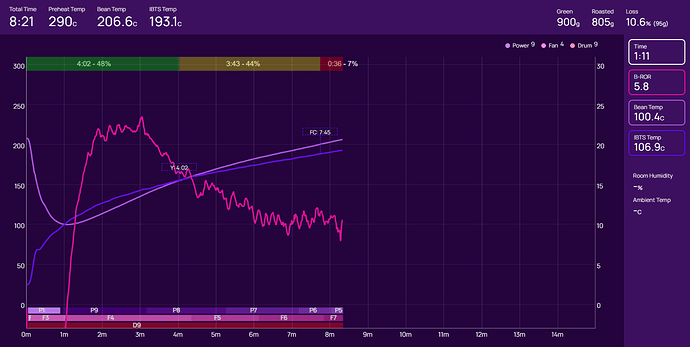 It’s interesting that your roasts runs fast for 900g, it looks more like something for a 350 to 500g roast. How did it cup? I was looking at your other roast profiles… you drop the beans very shortly after 1C, and your YP and 1C temp seems to be a little earlier than mine. I think the main thing is whether the cup is to your satisfaction or does it taste underdeveloped.

You could search on RoastWorld for others who roast 900g to get inspirations (in RW, go to Roast menu, then select Discover, then on the right cover select filter and then in the pop up set the search filter - I found inspiration for 1kg roasts this way).

What’s interesting though, is that in the past I was roasting with the same settings and managed to get the roast to 11 minutes.

Edit: I think I just thought of the reason why the roast is so fast. It’s summer. It’s possible that the ambient temperature has changed so much that the Bullet retains so much more heat.

Come back and let us know how it goes with dropping the PH.

Did a 1kg roast of an Ethiopian Yirg washed, using my usual profile for 1kg, and that roast ran fast by nearly 1.5 mins (based on when it hit YP and 1C) when compared to the other 2 1kg roast I did on the same day. It’s rather interesting to say the least! The first time roasted this particular bean it also ran fast but I thought it was because the Bullet was already nice and hot as it was the 3rd batch. Fascinating…

Check 2 things to see if there might be outside influence:

Ambient temp & humidity seems to have a lesser impact to total roast time for me (no AC in the shop so the temp is whatever the sun says it is). However…

The starting value of Bean Temp (at Charge) seems to be a significant influencer with my 550 gm batch size. A 4F° difference, e.g. 293°F vs. 297°F, can predict a difference in total roast time of over a minute. I’m not sure this is the variable you encountered but… ??

The 3x 1kg roasts I did on Saturday were same day back to back, so I would expect the two variables you mentioned Bruce, to be of minimal difference. On the other hand, the bean temp at charge… I didn’t make a note of it so I don’t know if it was hugely different or not between the 3. That said, the 1st and 3rd roasts of the session hit the YP and 1C around the time I expected, but the washed Ethiopia (which was the 2nd roast of the day) was faster. Interesting

Hey ! Sorry for the late reply, I’ve been experimenting and have found drum speeds to be a useful tool in creating flavour experiences in the cup.

Every Bullet is different, for instance my D5 is 42 RPM and that’s about as low as I’d recommend anyone go on the Bullet, at least in my experience roasting 910gram batches. My journey down this particular rabbit hole started with a rather troublesome washed colombian that I just found to be far too acidic for my tastes. What started as an attempt to attenuate the acidity using a more “conductive” approach led to me discovering how slow drum speeds in the bullet can increase body and mouthfeel in the cup without necessarily making things “roasty”. I managed to avoid scorching everything surprisingly, and in combination with my lower pre-heat (aiming for a 72-75 degree Turn using a 30 second soak at P0 straight to P9), I was blown away at the rich juicy cups I was able to obtain. Seriously crushable stuff. Don’t let the long Drying times dissuade you, 6-7 minutes in my cases…it’s what happens after that I find is most important anyway.

Couple of things I have noted using a very slow drum speed:

Also how’s this for interesting: when brewing with Third Wave water, I compared a Guatemalan I roasted using only D9 with one only using D5. Both we’re very nice, the D9 having nice clarity and beautiful flavors although much less body than the D5. The D5 had such lovely texture and was crushable, no bitterness despite being little bit less clear. It was toss up, both we’re great but different, no clear winner. However when brewing both coffees using basic filter water (I have an Aquagear filter jug thingy) the D5 coffee won hands down! The flavor still managed to punch through while the D9 fell flat. So this was quite interesting as most people drinking my roasts don’t go through the trouble of using Third Wave or water treated specifically for coffee. Very interesting how this approach results in coffee that is perhaps more accessible to your average consumer? I definitely plan on tasting the same coffees now using both Third Wave and regular filter water in the future.

Currently I’m experimenting with a graduated drum speed approach, starting at D5 and hitting D9 before yellow to try and capture the best of both worlds:
texture, juicyness, creaminess with articulated clear flavors. So far so good, but I’m still working that out.

This roast here was particularly tasty, multiple people telling me it was the best coffee they ever had. Higher air and the slow drum speed seems to add a lovely new dimension to the sweetness.

Damn, look at this educational reply.

I didn’t plan on changing drum speed, but after your review, I might very well do that, especially for more full-bodied, sweet Brazilian naturals.

These roasts were 910 grams? Did you have any problems catching beans in the tryer with lower drum speeds?

Hey @burlchester This is a great writeup and feedback on how it cup. It is interesting you use D5 all the way. I will have to try this out. I tweak D setting a little but settled on D8 for most of the roast session. I’m going to need to re-read your post several times over

EDIT: I noticed you drop the beans around 400F which is on the light side for me. Do you have something like the RoastVision (aka Espresso Vision) to take a reading? I would be curious what reading it gives you for this Yeny #2 roast.

Hey, no I dont currently own any color grading tools (soon!) but I will say yes the slower drum speed approach is probably best for light to medium light roasts. Going for further development will certainly introduce too much conductive roastyness Imo. That being said the result is somewhat of a hybrid with light roast flavors and medium levels of body and development at the same time. It’s quite interesting.

Keep in mind! This approach is not for all beans! D5 all the way through on my Guatemalan wasnt bad but just too much conductive flavor. My Kenyan as well (the articulate fruits were too tame). I’m gravitating to a more best of both worlds approach right now with starting on D5 and graduating up to D9 by 165 IBTS in time for my yellow phase.

Also, I’ve only experimented with dense Washed Coffees. D5 all the through for a Natural is a whole other experiment.

It does take a little more time to catch beans but it wasn’t as bad as people make it seem. I haven’t tried this on a natural, might be great but just pay extra attention for scorching as I believe they are more delicate to roast.

Keep us posted on your experiments! I going try stretching out my yellowing phase based on some of your techniques, but because I roast a full 1kg and then to go a bit darker I will probably stick to a slightly higher PH to maintain momentum. I tend to drop between 410F and 425F (depending on who I’m roasting for). This is really good stuff

appreciate your sharing all this

agreed…thanks for sharing all of this!

(and I’m bummed that RoastVisions have been unavailable since April, imma snap one of those up when more come out)

I dropped the preheat temperature quite a lot, from 290 to 265 , and the roast went on much more according to my expectations. The goal was around 10:30 which I quite succeeded.

I also lowered the drum speed from D9 to D8 - not such a substantial difference but we’ll see, maybe there’ll be more sweetness.

This is an aerobic Mundo Novo with quite classic Brazilian profile of milk chocolate, cocoa, nuts and raisins.

I’m puzzled… your screen shot shows a PH temp of 265C but you mentioned that your PH temp is 165C in your post. I take it that it cupped well for you based on your last statement?