So far I’ve managed to go through about 25 roasts (still a newbie) and I’m struggling with getting homogeneous results in terms of bean roasting level.
As with many others, I’m trying to stick with Rao’s method of a smooth declining ROR throughout my roasts.
However, it seems that I always have to do some picking at the end of my roasts to remove the outliers. I’ve tried playing around with the Drum speed a bit, but my results are always pretty much the same.

Does this seem out of the ordinary? Any suggestions to help me achieve better results?

FWIW, I’ve been using the I-ROR as a reference for my declining ROR. 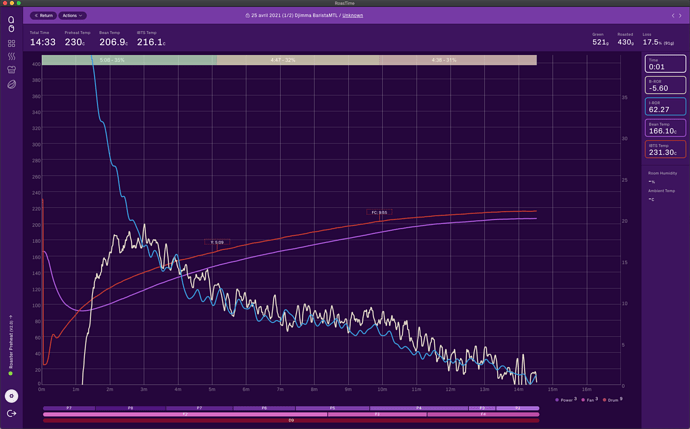 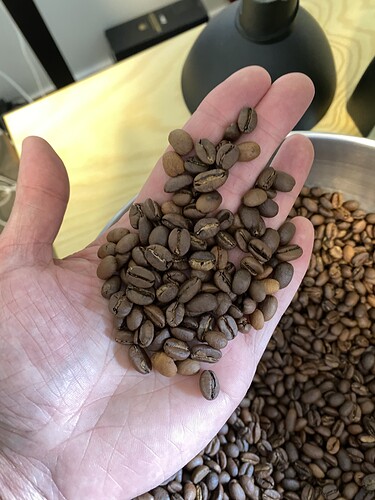 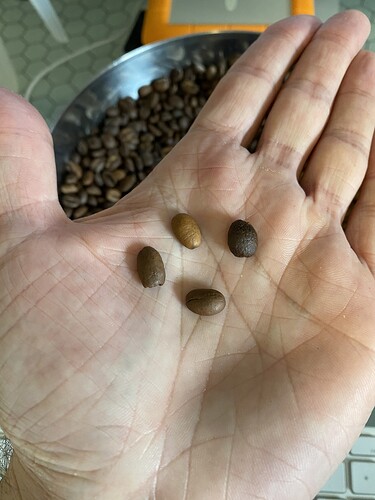 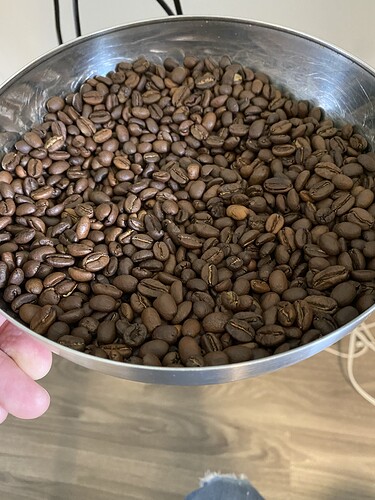 That unevenness may be due to the green beans rather than your roasting technique. Sweet Marias has a few articles on “quakers”, for example 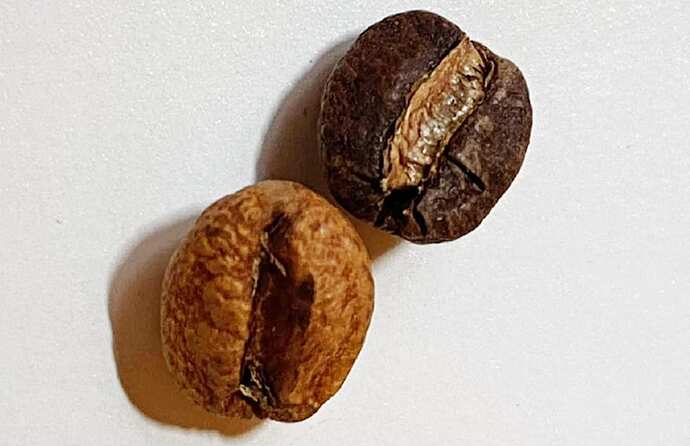 Coffee is science, and we have the studies to prove it!

The light bean in your hand (last pic w/ 4 beans) looks like a quaker to me, whereas the differences in the darkness of the other beans may be simply a mix of different types of coffees in the greens.

Costa Rica La Minita Tarrazu is one coffee that comes to mind which is typically very very uniform, in case you’re looking for something else to compare.

Thanks for the info Brad, very informative.
These beans were from a well known roaster here in Canada (sent as a gift). I’ve purchased countless bags of their roasted coffee and they’ve always been very evenly roasted.

My hypothesis would be that the few quakers are probably removed before packaging.
Also, would it be possible that there italian roast medium-dark (16 min +) with less heat help reach a more even result?

@LGD what drum speed did you use? a lower drum speed will lead to uneven roasting. You mentioned that you have played around with it but that could mean a bunch of different things. You could try simply running the whole roast at 9. If you still have uneven roasting you have eliminate drum speed as a possibility.

Sure you can pick out a few quakers no problem. I still think you’ve got at least two coffee varieties in those greens, maybe a mix of Caturra and Bourbon or something like that. Which isn’t necessarily bad, BTW. Some people deliberately blend pre-roast. How does that roast coffee taste?

A wild guess is that the cup might be a little dull and bitter, since that was a pretty long slow roast (probably in an attempt to roast more evenly?). 17% weight loss is quite a bit. You could try adding a P9 interval in the beginning (P7,P9,P8,P7…) to bump up your peak RoR and take a couple of minutes out of the roast, maybe eliminate F4 at the end to shorten the development time yet reach the same drop temp? Yours is pretty similar to this one, which came out really rich and sweet:

Sorry if this is more than you were looking for…

No apologies needed, I welcome all input

I will try adding a P9 interval next time and see how it goes.
I used F4 at the end to avoid “smokey” bean taste, because I had lots of chaff coming out and was seeing a bit more smoke than usual. Am I correct in thinking that? I guess adding the P9 interval and shorting the dev time might alleviate that? I’m still unsure how to handle fan speed with the bullet. I usually never go faster than 3-4 while roasting (usually starting at F2). 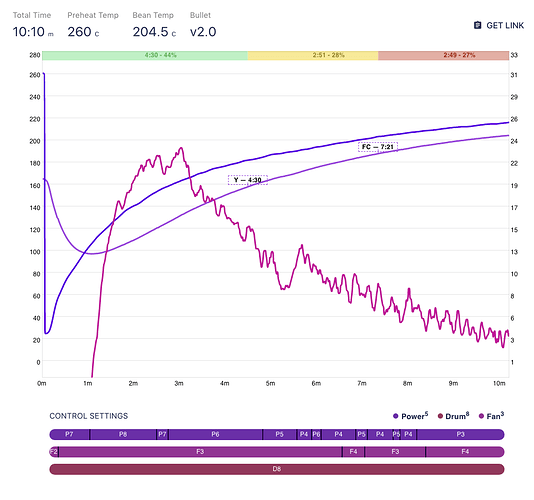 Perhaps a higher charge temperature. I do a lot of 500g roasts and never need P9. I’m actually surprised to see I used P8 on this roast.

I don’t get any scorching, and the roast is a few minutes shorter, which is probably a good thing for flavor.

@damon those are some nice looking curves. Potential scorching (never actually seen it myself either) is one of the reasons I like a little lower preheat with the mini-soak using a P7 interval first. The other reason is that when you use P9 you have 4 power adjustments available to decrease momentum heading into FC at P5. If you used only a maximum of P8 or even P7 you only have 2 power cuts available, which doesn’t give you much leeway to control the shape of the RoR mid-roast if you want to avoid using The Fan.

@LGD yep bumping up to F4 at the end to vent smoke and chaff makes sense. I’ve been tempted to do that in a couple of larger 500-600g batches recently, but resisted and actually did not notice smoky flavor in the cup. Those were medium roasts with 215C - 218C drop temperature, well before SC. Did get more chaff in the cooling tray filter, which doesn’t seem like a problem? For me increasing fan always has a strong cooling effect, especially at the end of a roast. Its frustrating when a fan increase quenches the RoR to near zero and you’re unable to reach your drop temperature target. But @damon did manage to get to F4 + P3 without killing the RoR. Very nice!