Since i did the firmware update (when i got the roaster it was all the way back at v.5.15), i get some beeping on the roaster (A-02) and the error log pop a notification mentioning those numbers: 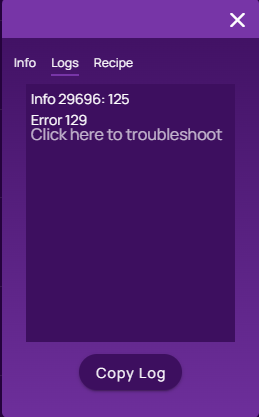 This also to some random crash during last week’s roast were the roaster suddenly went all the way down to P0 during development phase. (see the drop around 10min) 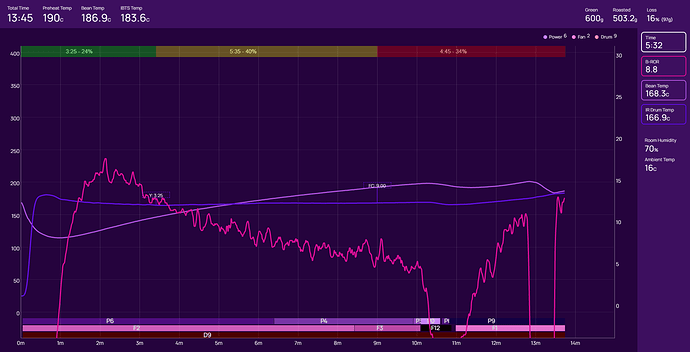 From what i read from a 2019 post, this could be related to fan speed and security mechanism? (fan is dirty and dont spin fast enough?)

A-02 is the Bullet “deadman switch”: if you don’t respond by pressing a button on the control panel within (as I recall!) 20 seconds, the Bullet will set power to P=0; I don’t know what firmware does to fan speed in that event but F12 may be related. The A-02 alarm has evolved from EU safety certification requirements Aillio must meet. The A-02 alarm is unrelated to the Log entry Error 129.

Error 129 is unique to a V1 bullet and indicates the IR cover glass is dirty- needs cleaning.

In terms of the profile I’m not sure what’s going on. Looks like power was set to P=0 then P=6 then P=9. If you didn’t respond to the A-02 alarm, then firmware will set Power to P=0. So that could explain the first event. I don’t know what firmware does to the fan when there is no response to the A-02… perhaps it sets the fan to higher speeds (?).

The later dramatic drop in Bean Temp at about 12m 45s is very steep. That looks like a failure in Bean Temp signal for about 40 sec which seems to be confirmed by Drum Temp staying steady thru that time. You may need to talk to Aillio Support about that later Bean Temp anomaly.

Thanks a lot Bruce!! The P6-P9 are my reaction when i saw the P0-F12 happening, that wasn’t enough for me to save the roast, also the 2nd peek to be really weird. Happy to at least know that it probably was the deadman switch thing and not my roaster acting weird.

You do have an IR sensor in your V1 though that sensor is not in the same location as that used in IBTS. The V1 sensor is mounted low on the front plate and is used to measure drum temp only like when preheating (hence the measurement name ‘drum temp’). Unlike IBTS in V1.5/2, however, it is positioned in a way that does not allow measurement of beans when roasting. That’s why it produces a somewhat flat line during the roast. You do see a decay in drum temp when beans are added/charged which causes drum temp to sag, then mid-roast drum temp start rising again during the last half of the roast.

I have never operated a V1 so what I’m posting is hearsay from posts here on R.W and from some info from the manual. Hopefully a V1 owner here can offer a little guidance if I’ve misstated something… ??

I’ll look into cleaning the little window before my next weekly roast to see if it cuts the warning!
Also, all of what you said is informative enough for me to now the roaster better which is super good!