In RT2, I can’t start my fan during preheat. In earlier versions I used a small amount of fan (F1 or F2) to preheat the exhaust pipe. This reduces the amount of condens.

I would like to see in future versions of RT that I can use the fan again during preheating.

The R1 was not designed to run the fans when preheating unless the drum needs to be cooled down to reach a lower drum temperature. The algorithm to determine when to go to charge mode will also not work correctly, so it is not something we are likely going to change.
Why is condensation a problem?

Because it is leaking moisture and it’s getting dirty because of the coffee-oils. But you’re right about the determination when to go to charge mode, In the previous roastprogram the announcement of “charge” did not occur anymore. 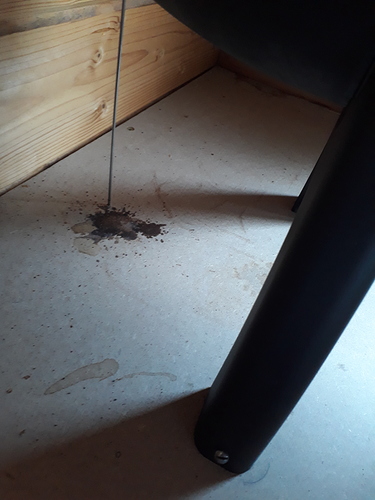 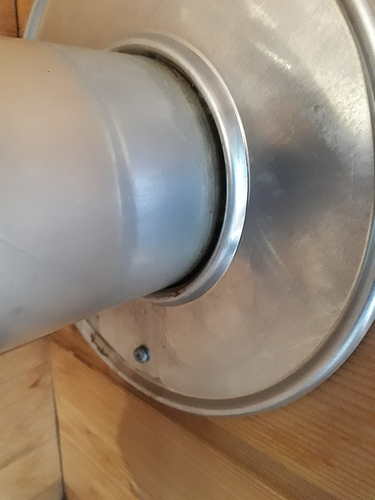 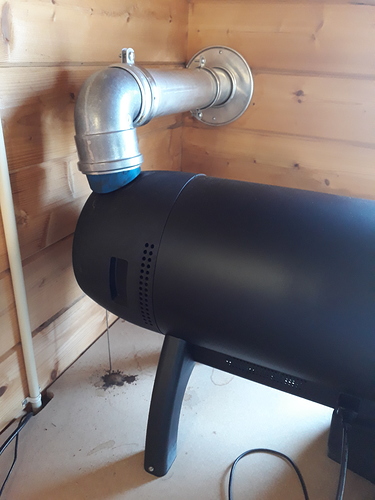 If the condensation drips I think you have a very dirty filter / too much back pressure in your exhaust pipe or use low fan setting.

Don’t think so because coffee-oils accumulates in the exhaust, and together with the condensation it makes a dirty drip. And, I clean my filter every 3-4 batches. But never mind, if I am the only one with this problem, and if it would affect the algorithm for the right temperature, I wouldn’t change it either.

Still I am very satisfied with the R1, the software could be better though still in progress. A very strong detail in roasting is the time in roast% after the first crack. Steve Scott (the “roastguru”) dictates that it should be 20-25% (although I am using 25-30%). A pity is nevertheless that the communication between roastworld and roastime fail in my case, but I already sent an email about this to support of aillio.

I’m going to guess that your condensation could be accumulating in that first 90-deg turn and I don’t see an in-line fan in the exhaust setup.

On other electric drum roasters I’ve owned (Alpenrost), I vented the smoke outdoors, but also had an inexpensive bathroom fan between the roaster and the exterior exit for the smoke. I never had any condensation or drip in that setup across years of use.

Nowadays, they make 4" inline fans (for duct pipe) that come with variable speed control that can be a good solution. Of course, a fan (if too strong) can pull too much air through the roaster which can affect drum heat. That’s where having some control over the fan speed helps.

The one thing that I encountered with exhausting the roast outdoors was roast-dust. Very fine material that will attach itself to the insides of your duct pipe. For my Aillio, I’ll be playing with using a cyclonic dust collector right off the exhaust port of the Bullet. The dust collector will trap all that fine roast-dust and the smoke will be exhausted outdoors. I’ll also be using an inline 4", variable speed fan to pull the smoke/odors outdoors. As usual with my concoctions, there will be a need for some “field modifications” once I get it all going.

I mention all this in case it may be helpful to your condensation problem.

Also think the problem is in the 90-deg turn. It is a good idea to install a bathroom fan. To not affect the drum heat, I’ll disconnect the roaster from the pipe and make a kind of hood. If the fan pulls to hard, it will pull from the room and not directly from the roaster. And, the 3-d printed connection is - although printed in nylon - starting to melt a little bit, and smoke leaks out of the pipe.

Thank you for the suggestion !

If I remember, nylon isn’t recommended for the 3D printed adapter. ABS is suggested, as it has a higher heat tolerance. My own is a PC-ABS “blend” that we use at my work. (It pays to be friends with the guy who runs the 3D printer.)

I was going to respond a bit more last night, but was prevented by the new-member yap-control provisions of this forum.

I don’t think the 90 elbo is a problem, but with no fan pulling the moist air outside my guess it that the condensation would naturally collect in that first turn.

I also think that your idea to have a hood that sits over the roaster will help and that is what I’m going to use as well. Having a closed exhaust system is tidy, but with added fan ventilation it can focus too much air-draw directly through the roaster. The challenge with a hood setup can be to keep roasting odor (not smoke) from funking the area where you roast. If my hood setup still allows too much roast odor, then I’ll have to make some adjustments to reduce open spaces around the hood. But, I won’t know what is needed until I start tinkering with it via actual roasts.

I still have 2 more (of 5) “seasoning roasts” to perform before starting to roast coffee that I’ll drink. I know that Aillio says (3) seasoning roasts, but I think (5) is a better number.

This is what I did today. Removed the connector between the exhaust and the pipe (printed in ABS, thought in was nylon). Although ABS is better resistant to heat it still got a little out of shape. Next thing I’ve done was buying a bathroom fan and pushed the adapter of the end of the pipe against the bathroom fan, didn’t seal it. Although there is a lot “leakage” of air, it seems to work. I tested it with a smoking peace of paper. In this way the bathroom fan doesn’t influence the airflow in my roaster, and the hot air mixes with cold air from the room, so it will not melt my bathroom fan. And perhaps it also pulls away some smoke when I empty the roaster. After my next roast I’ll let you know if it worked. Two pictures. Hope you can see the “smoke test”. 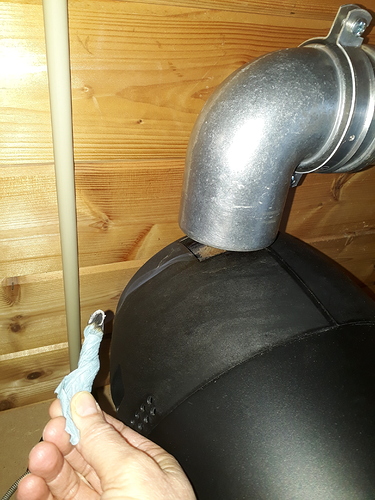 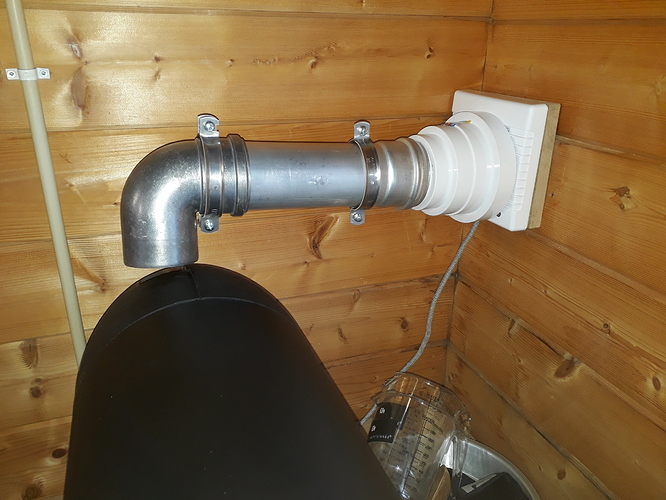 Yes, I don’t think the 3D or any adapter is needed on the Bullet. If I really felt that an adapter was needed, I’d fashion one from aluminum sheet metal to connect to the 4" duct.

Having your 4" exhaust pipe’s elbo sitting right over the Bullet’s exhaust port (with an active fan) should easily exhaust the smoke. From my prior experience with other roasters, the fine, blond-colored roast dust will also accumulate over-time inside the exhaust pipe. Your setup allows you to disconnect and clean-out that dust when/if there is sufficient build-up.