Marking when the beans are yellowing seems somewhat arbitrary. Is this really a useful marker? What objective standard should I use to determine when green beans have “yellowed”?

Marking as yellow is the end of the drying phase and the start of the Maillard phase. It is somewhat arbitrary but as long as you’re consistent with each of your roasts it is useful when measured as a percentage of total roast time. I’m hoping that at some point the RT software will track the phases similar to Artisan. I use Artisan with my other roaster and I have the program auto mark the dry phase between 305-310F. I find with the Bullet I am marking yellow around 165C on average.

I’m not familiar with Artisan. I’ll hunt around to learn about that, but thanks for the reply Wayne!

I also wonder about people’s strategy on when to click that yellow button. I do notice a point when there is very little traces of green left in the bean, and it is accompanied by a unique smell. I bet that is really the yellow point but I’m not sure how others determine it. I’ve seen others graphs, and most people are clicking that yellow button after I do.

I’m hitting yellowing stage quite consistently around 4 minutes into the roast, 145-150C.

How do you actually know that you have hit yellow stage? Is it something you see? Hear? Smell? I’m just wondering how and when you say “yep, just got yellow”…

Maybe this will help: https://legacy.sweetmarias.com/library/using-sight-to-determine-degree-of-roast/

Yeah that is a lot of how I have been doing it the last couple years of roasting (originally with the behmor, then with the sonofresco and now with this machine).

I’m hoping that others will give specific clues that they actually use to determine yellow. I’ve had a few people link to common roasting guidance docs but no one has been willing to answer this question personally for some reason. It’s like its taboo or something to answer it.

so you generally just go off of temperature and the visual color then (based on the SM picture guidelines)? I have used smell more often than sight for a lot of my roasts, and I do tend to smell a difference around this stage. I’ve noticed that the SM guide does talk about marbling in the end of yellow phase, is that part of your technique? It sounds like, based on the response above, that you generally just use temp and the indicator?

so you generally just go off of temperature and the visual color then (based on the SM picture guidelines)? I have used smell more often than sight for a lot of my roasts, and I do tend to smell a difference around this stage. I’ve noticed that the SM guide does talk about marbling in the end of yellow phase, is that part of your technique? It sounds like, based on the response above, that you generally just use temp and the indicator?

I’ve used that document from Sweet Maria’s to determine yellowing stage using sight. I, too, started roasting on the Behmor and carrying the information forward when moving to the Aillio back in 2016. Once you get used to seeing the beans physically turn yellow it gets easier to document the yellowing stage.

The issue I’m having is that it seems like there is a lot of grades between green and yellow and its hard to tell if there is some other signal used in conjunction with sight that will sort of say “now” is the point. I think the smell plus the elimination of all green plus the marbling would be enough…

You’re way over thinking this Joshua. When the bean changes from green color to a yellowing color mark it. It’s about being consistent in how you mark it…it’s not an exact science, temperature or color. Close enough is good. If you’re measuring the phases by time and percentage this a meaningful marker. It’s one third of the process. If you’re not, it really doesn’t matter.

Fair point. It’s not in my personality to not overthink something though…

The reason I’m focused on this is on another thread people pointed out that my yellow point was way before theirs, and it got me a little self conscious

I appreciate all the interaction with the question. I have a few other markers to use so I can feel more consistent. Like @joshua.armour , I tend to want more precision than what I can reasonably expect, but I’m in an engineering world at work and it comes by nature. I’ll try smell and temperature as additional ways to mark yellow. Using color alone reminds me of how our family will occasionally argue about whether a particular article of clothing is green enough to count for St Patrick’s Day purposes. Everyone’s just insuring against a reproving pinch in that case. When it comes to when coffee beans have crossed from green to yellow, I suppose this engineer just wants pretty roast profiles, but what matters is the cup.

Whoever said something about being consistent probably has the best advice. The transition is gradual and there are smells in the exhaust that repeat every roast. The exact temperature varies a little as it depends on the amount of moisture in the beans, the drum temp and the environment (temp and humidity).

The paper @wayne linked above (“Using Sight…”) on the SM site is a detailed log siting internal bean temp (not sure how he got that!). An IR temp probe comes as close as any non-lab environment in emulating that. That paper sites several stages in the yellow → yellow-tan → light-brown transition (including photos), but you can’t use the temps exactly as published because of the variable of moisture content. Since I’ve had to re-learn a lot of what I thought I knew about roasting now that I have the Bullet, that article more than any other has kept me steered toward what I want.

Be aware that photos can be misleading if you try to use them as an absolute indicator. The variables in printers, ink cartridges, and the rendering of the original image all affect what each of us sees. Iirc, Thompson includes a grey scale for calibration but that’s probably over-kill.

Yes, having the Bullet has me reading up on all this, including Scott Rao’s Coffee Roasting Companion. Now I can actually apply these principles! 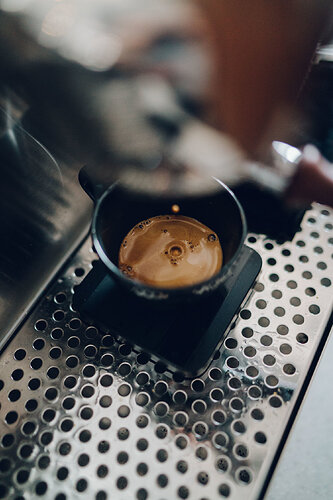 Scott Rao’s third book is an expert’s how-to for coffee roasters. Covering everything from green coffee bean storage, to the in’s and out’s of roasters.

Having looked through this book, I really don’t see the justification for the $45 price tag, sorry…it’s too wide and not deep enough.

Perhaps not for a professional roaster, but for ameteurs like me, it was well worth that to help me create a positive ROI roasting my own beans for myself and my family over the years. Now I can apply his principles more strictly with the Bullet, because this device allows for that. Positively giddy.

I use the simple classification of no hints of green in the beans in the trier - all yellow. This means if some are a little orange, but one is still a bit green, it’s no call. I often find that a few seconds later I try again, and they are all yellow.

If you really wanted to be exact, pull out a yellow bean and use that for future reference, but I have been told that different beans have different levels of yellow. Some start more yellow, so it seems to be more of a context to the beans around it, than a hard and fast rule.

I just do it this way every time. I think it is all somewhat subjective. A bit like calling first crack. You just have decide what you are going to use each time and stick with it.

(disclaimer - I am a very new roaster!)

It can certainly be hard to tell the colour change consistently and the little led light doesn’t help. There are threads on hear I believe about this. One suggestion is to use a fluorescent light instead. I did this ( not sure what colour temp it was ) and it was easier to see the colour change. I found that with my eyes the change ( when every bean was no longer green ) happened consistently at about 170C so now I just mark my yellow at that point, ( 165C for decaf ). I am a reasonably fussy person but I don’t need my fussiness to turn to frustration so this is what I do. As said earlier its somewhat subjective and you will also find with time that your eyes and mind will train itself to see the change better. Have yourself a great day!!!