I have just finished the seasoning of my first bullet. I have some Brazilian Santos I would like to roast to City levels. I was wondering if anyone has a profile share that worked out well in the cup.

I poked around in the Dashboard and did a search for Brazil Santos beans from a US vendor. I found this:

It’s from a couple years ago.

The search facility in R.W will help with finding roast profiles to the extent the bean isn’t too obscure. Start in your Dashboard and choose Beans > Search. Fill in the fields… 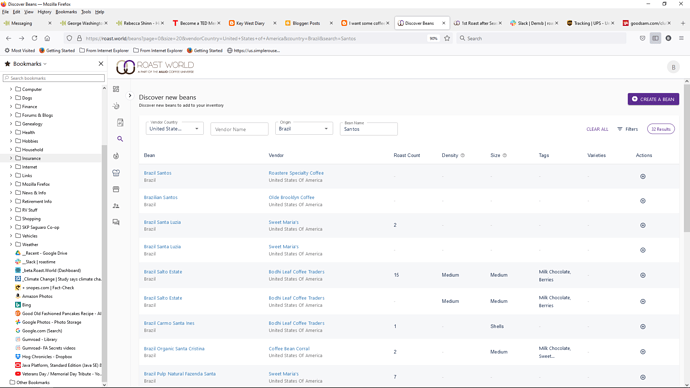 … and go the hits for the beans the search yields.

In the upper right are listed the most recent roasts that have been saved on the server. In this case the 2 hits were ~2 years old from a batch of Brazil Santos Luzia that Sweet Maria’s had at that time. I just clicked on one of the roasts (not the User name) and that’s the link at the top of this Reply.

Hey Bruce. Do you know why so many beans roasted in the database will say 40+ roasts, yet there’s often none listed? I also see a lot as Unknown User, which I’d imagine may be former users who’ve deleted their account. For those, they will just display a message the roast is no longer available. Of course you can make your roasts private, but the amount of beans showing many roasts logged on each bean, as no roasts that show up? Probably should be asking that over on Slack, but I know you’ve owned your Bullet a lot longer than I, so figured you might know. Or, best case scenario, I am just overlooking something you may point out. Thanks. BTW - you may have figured this out already, but I’m GroundPoundCoffee on Slack.

Not positive but I’ll speculate it has to do with

The new service wants to use e-Mail registry for user ID so to preserve existing user IDs they had to develop some workarounds that were for the most part transparent to us as users. Dunno what was involved but after a day or 2 I was working and had an unaltered user name so I just kept on and pretended it was no big deal. But it was.

It’s just a bummer because it’s a big part of what makes the experience more efficient, not to mention less costly, if you can find something decent to start with, but you know that all the same.

I am seeing Unknown User from only a month ago. Somehow that’s got to be from something past the change-over. Actually I got my Bullet right around that time, so why it appended a few characters to the end of my user name, which I later changed as you can see.

Get this Bruce… So one of the beans I created and added to my inventory, where I’ve roasted last week - I go back and click on the vendor and it shows my roast in the right column list as usual, but says @Unknown Owner and it’s my roast. ??? Something’s up there. It’s obviously having relational DB issues it appears.

I wonder if someone edited the bean or vendor for their own use which might have made links invalid… ?? We need @derrxb to poke at this.

Agreed. it’s stopping useful information from being shared, which is a big part of the web component in the first place, I’d imagine

Hi guys, I saw the “unknown owner” issue in another thread. I will look into getting this fixed. I’ll write an update here when it’s done. The wrong number of roasts is probably caused by private roasts for that bean. I’ll update this to not include it in the count of roasts per bean.

I did report this in this thread (above). I don’t set any roasts to Private, btw

Hey everyone, I just want to let you know that this is fixed. It was a bug caused by only showing verified users in the recent roasts list. I removed this requirement and now you can see roasts from all users.

I also fixed this to only count public roasts. If you still see this issue can you send me the link to the Discover beans page that shows the incorrect count?

As I had mentioned, that one thing was really inhibiting one of the biggest benefits of having Roast.World logging roasts for the community. The fix you made really opened up a lot of what could not be seen up till now and I can not over state how much that improves the Aillio community’s usefulness. Not sure why it sat like that for so long, but BRAVO @derrxb !