Hey thanks for jumping in!

You have described my process accurately.

This is done without any beans.

So for craps and giggles, I did another test run. This time with RT and a desk fan blowing under the roaster. I was kinda hoping maybe there was a component overheating and causing the drop in power.

Wattage held steady above 1500w for 3:30, then continued it’s steady decline throughout the roast. FC marks the point where wattage had dropped into the 1100w territory. 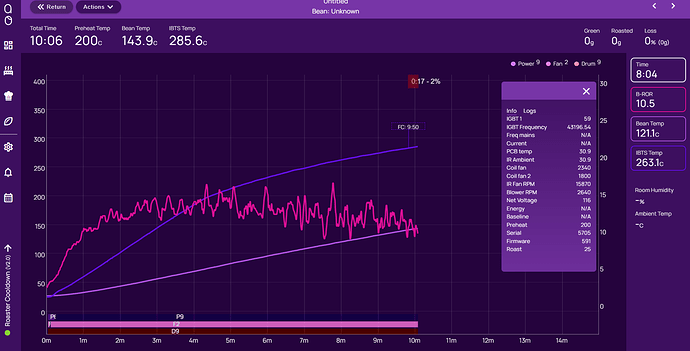 You can see where the graph changes from a linear-ish temperature increase to a less aggressive rise that correlates with the decrease in wattage.

Assuming this isn’t a safety feature or intentionally coded PID to decrease power over time, no wonder I’m having trouble hitting first crack in the same time as others if my power output drops steadily after 3:30 minutes.

Just spinning my wheels until support gets back to.

Support got back to me early this evening and they suggested updating to the beta firmware 602. Reading the changelogs, I was somewhat hopeful.

Starting wattage was 1500w+. After 8 minutes, the wattage had dropped to 1465. Significantly less than before.

Out of idle curiosity because heat is always bad for electronics, I turned on my “oh crap the IGBT is about to overheat again” fan. Within about 15 seconds, the roaster had returned to 1500w of power draw. The additional fan is on a separate circuit so it wasn’t that added load.

I put my small underbelly fan directed at the circuit board, but didn’t see the watts rise or the PCB get cooler. (it is a weak fan)

Within about 15 seconds, the roaster had returned to 1500w of power draw.

Did it stay there for how long?

Yup, that basically matches my trend with v591 prior to updating the firmware to v602.

Edit: Placing a fan under the bullet also had no effect for me with v591.

I kept it there for a minute or two. It was late and the bean temp was approaching 300 and I don’t want to run it hotter than that for no specific reason.

Allowed to completely cool over an hour

The test run with the fan never dropped below 1500w and had a higher ending temperature in less time.

This has got me thinking:
What is happening with the power applied to the induction heating unit during a roast?

I am going to try a couple of more tests this evening.
With my Wattmeter plugged in,
I will do a preheat.
Then a small soak at P5 for about a minute
then P9 for several minutes and see if the induction board is ramping to 1500 Watts.

Or maybe I will just roast some beans with one of my proven profiles and see what the current draw is during the different P levels.

This is kind of discouraging. It is like finding out that we have a car with a faulty gas peddle and we have been flooring it to try to maintain our desired speed.

It is an interesting problem. The thing that concerns me the most is getting consistent results. If the power board is restricting output as the board warms up, back to back roasts will not be the same.

Let us know what you get and also the f/w version you’re on. Sounds like from @krame’s test that the f/w version has something to do with it as well. This is very interesting stuff…

the f/w version has something to do with it as well.

I have a number of data points that would suggest this to be the case. Plus Aillio support recommending the firmware upgrade as a fix for the wattage drop.

Yea… I’ve been cooling the underbody with a small fan pointing at the left side of the roaster (same side as the plug), but my f/w is a much older version (I think 561 or 567) since I bought mine in Dec 2020. I’ve been hesitant about upgrading the f/w due to so many people having issues with it and having to go into bootloader mode… just didn’t want to deal with a potential time sink to resolve any issues.

I feel exactly the same way. I am at v591 and am reluctant to upgrade the f/w.

But… I will probably take the risk and upgrade the firmware after my first test. The benefit may be worth the risk.

OK, F2 and D9 with latest production FW (not beta) as well. I didn’t take voltage during the run, but after the IBTS went red I cycled the roaster and that time watched voltage and current as the thermal management kicked in. At the end of that pass I was seeing in the neighborhood of [email protected] for ~1340W, though I sampled it a couple of times at 1320W, and had I left things running, I’m sure I would have seen it continue to track downward.

My AC is far from optimal. It’s a 15A circuit, probably at the end of the branch, and I use a 10AWG 10ft extension cord to situate the roaster out on the patio. My garage has a dedicated 20A circuit so I might have to try this again out there!

I’d put money down that if you try it on the 20a circuit, you’ll see nearly the exact same thing.

I tried on two separate brand new 20a isolated circuits with basically the same result as you.

I use a 10 gauge 25ft extension wire, so that will be the next trial before actually roasting again. I don’t expect to see much change.

This is a really interesting thread. Thanks for documenting this.

I don’t have access to the wattmeter, etc, in order to participate, but can add that I’ve been running f/w beta 602 since October 26, 2021, (only 66 roasts since) and had no problems with it.