Any chance of the US getting a 20A power board? Or even one of the 220V boards?

I know there are some 220V boards capable of much higher heat output, but I think they’re not CE rated or something. My question is, is there any way we can get one of these, or a 110v 20A board to get some additional heat output?

For now, only a few people doing long term testing have these. It is only available for the 220V board.
Is the power not enough?

I was reading the post on here with the in depth analysis on the power that the 110 roasters are using, and it seems like they don’t quite maintain max power at f9. I saw that after this post. Is that a safety mechanism? If f9 maintained full 1800W power (minus power used by motors and fans) That might be enough, but it seems like 1200 is about max, sometimes down to 1100ish.

That thread has at least three datapoints:

To sustain that at higher ambient temps you need a fan, (50 cfm seems to be about the minimum that would work) preferably not running on the same line power as the roaster, pointing right at those IGBTs to keep the temp sensor values under 80C (exactly the safety mechanism you ask about).

The IGBT current limiting threshold temp was revised upward in one or more of the recent firmware revisions; see the release notes to check whether you’re running with a version that includes the higher values.

In my case I observed that my line voltage had sagged to 105V so my guess is that if I were on a circuit with less crappy IR drop, I’d see better P9 power.

The Bullet line voltage measurement is not at the connector, so you’re seeing a little line drop on the power board itself. The 105 VAC Info reading is not exclusively the roaster loading your power line. The difference shows up with the Kill-A-Watt. Iirc I see about 4-5 VAC difference between measurements (some of which is likely errors in measurements) at P7 power setting.

it seems like they don’t quite maintain max power at f9. I saw that after this post. Is that a safety mechanism?

I don’t know if it is a safety mechanism or a thermal fault with the circuitry that is powering the induction unit. What we did figure out is: If you keep the PCB cool, the power to the induction unit does not drop.

Just to clarify: There is a safety mechanism that will turn off the power to the induction unit if the PCB temperature goes above the set limit (80C?)

They made some adjustments to the firmware for Beta 605 that may help with the power to the induction unit.

That’s a good point. I’ve assumed that the roaster is actively limiting current, but I don’t know that for a fact.

If you look at the table I posted in the other thread, I’m seeing the power start to drop from that 1430W zone when the IGBT sensor value exceeds 75C.

Hi Bruce, the 105V is what I measured at the Kill-A-Watt. And that is the reading I get at P9; at lower power levels in the same roast I see higher voltage.

Just to try to clarify a few things.
The nominal voltage to the Bullet is 120V or 230V
If you have a 120V version and your measured line voltage is below 110V then the power could be reduced.
Using a power meter to measure the voltage and power is a good idea. A cold Bullet should use 1500 to 1550W and then drop off a little bit.
Please use the latest beta 605 to get the most power out of your induction board.
The temperature shut off is on the IGBTs at 98C. For the ambient IR it is 80C.

Thanks @jacob! I’m actually going to try another 1kg control roast either today or tomorrow.

I’ve upgraded to 605 since the last 1kg roast, and I might run it out on my 20A garage circuit to see if I can see a different line voltage there.

I took the CoffeeMind Roasting Fundamentals course with Morten Munchow this past monday. There were only three of us on the call, with Morten and the other student in Europe using 230v Bullets and me in the US with the 120V. We all used the same initial profile to start roasting. My roast curve lagged far behind the two European roasters. This is with the Bullet running off of an Ecoflow Delta Pro that was NOT connected to mains (because then it runs in passthrough mode). This roast (1kg) should have hit first crack at around 9 minutes and then ended at 211c 3 minutes later (the European Bullets were both close to those marks). This was with firmware 596 on my machine. All of us also got errors during the class (error 42). I have since upgraded to the latest firmware beta, but have not had a chance to try it yet. Oh, I also have a small fan pointing up at the PCB that I run on high while roasting. Error 42 is IBTS housing > 75c, so I’m not sure the fan will make any difference for that. Still, for the roast below, there was no error, just not enough power to keep up with the European machines. 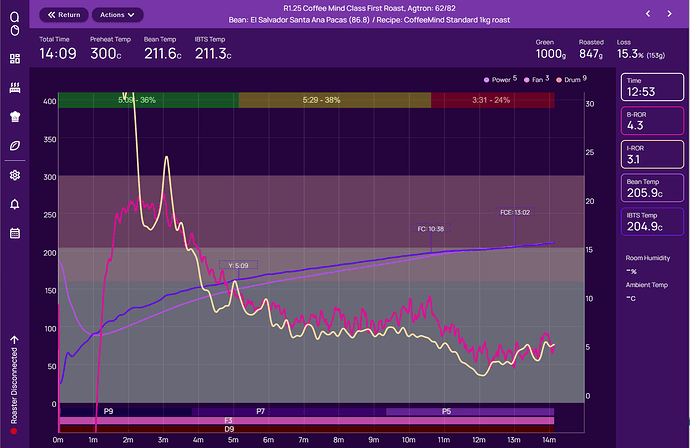 The beta firmware should improve that somewhat. Let us know the outcome.