Anyone know what the connector type is called for the Bean cooling fan? I need to make some mods because… mods.

I need to make some mods because… mods.

I’m with you on this:

I need to make some mods because… mods

I’m still getting a ton of smoke when roasting even using a 6in cloudline above the exhaust. I removed the filter box and vented the cooling tray outside to see if that was the issue but no real change.

So I have to be getting smoke from the bean chute, tryer and/or door right?

So I’m going to make a hood and see if it helps. The way my room is set up, I need the cooling tray to route to the left, so I just need a longer cord.

So with the cooling tray I had another vent hose to direct the exhaust to right under my hood vent, otherwise it really went all over my house!

So I have to be getting smoke from the bean chute, tryer and/or door right?

Ooo… I’ve not had that problem, but then I have the chute plug in, and tryer in during my roast. Never had smoke from the door though…

Yeah it’s weird. I can’t see smoke coming from anywhere else but it’s there even before I drop the beans.

I have a list of theories to work through.

I have two windows about 15ft apart. Vent out one and completely open the other. The windows are a little smol.

The windows are below ground with covers over the holes which I’ve pulled back a bit.

Also if you don’t have a filter before the S6, there could be smoke residue crud on your motor and fan blade. Does the exhaust from the fan seem strong?

Did this just start happening?

I don’t know how you get any roasting done- there’s way too many fun toys in the room!!

Proximity to the roaster exhaust makes a significant difference for me.

Just for the sake of posterity, here’s what I ended up with: [image] [image] AC Infinity S6 with matched inline filter box, 8" x 8" to 6" register for the hood. Roasted deep into second crack, could visualize smoke from the bullet exhaust in a neat little white column without any noticable odors. Until I dumped the beans. Still have stock bean cooling. S6 was set to 6 out of 10, first and second crack clearly audible.

I removed the filter to make sure it wasn’t the cause.

I thought that might be your storage position but I had to ask.

For my setup, I currently am using a range hood to exhaust the smoke outside and it is not enough. I temporarily have added cardboard sides coming down from the vent hood to “box” the area around the Bullet and that works pretty well. It is not pretty, but I am in the garage and it is “temporary”. A lot of the smoke that I was/am dealing with comes from the exhaust of the cooling tray and most of my roasts are light, light/medium.

I don’t know how you get any roasting done- there’s way too many fun toys in the room!!

That’s the problem. Too many things so nothing actually gets finished.

Did this just start happening?

I feel like it has but my wife doesn’t.

Prior to that, is it possible that the positive air pressure from the S6 is pushing smoke back down the exhaust for the cooling tray?

I just added the separate bean cooling duct last week to see if that would help with the smoke. While you can’t see it, I have an inline duct fan on that too.

Less likely, there could be a problem with the exhausted air being recirculated back into the roasting space.

This may be the culprit. It’s the variable I’m going to change next. The window vent insert is just cardboard, so it’s not really sealed. Here’s an outside view of the window: 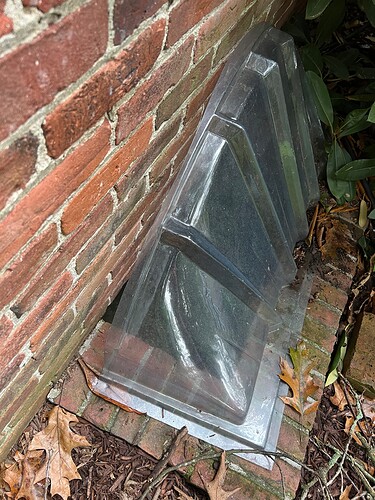 It’s not a big stretch to think that some smoke is swirling around in there.

FWIW - in terms of the makeup air, looking at your photo, the window to the left should be the one you crack open to let the fresh air in to replace what gets sucked out.

As @billc pointed out regarding the cooling tray, I have a vent hose directly over where the fan is to direct that exhaust out. See my setup here. My vent hood is about 4 to 6 inches above the top of the roaster. I put a filter behind the baffle filter of my vent hood to catch any crud so it doesn’t clog up the motor. I have a window to the right of that setup that I also open a crack in addition to having makeup air drawn into my house by a “fan in a can” in the basement that draws in outside air (required by building code). Your S6 really should be sufficient … my vent hood runs up to 900 cfm in 6 step settings and it is sufficient for roasting.

FWIW - in terms of the makeup air, looking at your photo, the window to the left should be the one you crack open to let the fresh air in to replace what gets sucked out.

This is what I do.

This may be the culprit. It’s the variable I’m going to change next. The window vent insert is just cardboard, so it’s not really sealed. Here’s an outside view of the window: …

I think you found your answer- the 6" CloudLine expects about 28 sq in of space to exit and that’s not going to meet that need; yet you need that protection for weather. Good- you found the culprit!