Can anyone tell me the voltage on the bean tray cooling fan? It’s variable speed so I’m guessing it’s a 3 wire dc fan? 12v would be my random guess?

I can’t answer your question but be aware that the cooling tray fan is providing air flow for the power board (under the perforated metal cover beneath the drum) even when the cooling is off (C0). If you change the airflow direction or cause the air flow to go to zero you will alter the air flow near the power board. Can’t imagine higher air flow would bother anything, but… ??

Thanks for your message, I don’t actually face my cooling fan back towards the power supply in the first place! Any cooling happening before or during the roast would have to be incredibly minimal as i can’t even hear the fan spinning while i can test it, even with the cooling fan on 1, after a roast, so maybe I’m missing out on the a small current wafting under there, i didn’t even know it runs during a roast. But, in exchange I’m not subjecting the electronics to the heavy residue infused jet engine coming out of there after a roast either!

Of course if our friends at aillio insist I’m better with the airflow, it’d be quite easy to supplement the air movement under the roaster with a little usb fan, while still replacing the cooling tray with a more powerful solution driven by a relay or the like.

Thanks again for the info!

Agreed. I had guessed it as a way to move stagnant air from under the board.

I’ve seen some residue on the perforated cover- white-smoke residue after a dark roast (I guess). So I redirected the cooling tray exhaust away from that area (re-routed the tray cable outside the leg and rotated the tray. I think it was @stuartmcknight that told me about the tray fan so I gave up and put it back. Even with the smoke residue on the cover, the power board had no sign of smoke residue (at least to a naked eye).

Before my CT Cooling tray I was concerned about the heat and dust / smoke from the cooling tray being blown underneath the power electronics board and the fan on that board sucking in the “contaminated” air. So I had a 3D printed adaptor with a 90 degree elbow made for the cooling tray so it redirected the nasty air out to the side where the power board fan couldn’t sip it. Even allowing for the question of smoke particles, I think pushing a source of sometimes hot air away from the PCB couldn’t be anything other than beneficial…

was just thinking about whether there could be an adaptor designed, and you’ve created one; could you be kind enough to share the file so I can get one printed off, please?

Why not just rotate the whole cooling tray? I just have mine so the fan is on the right instead of the back, the tray is still right under the door, just rotated 90° clockwise

That’s what I’ve always done, too. Works well for my exhaust set up.

I once uploaded this 80mm fan to 100mm hose adapter to the FB user group: 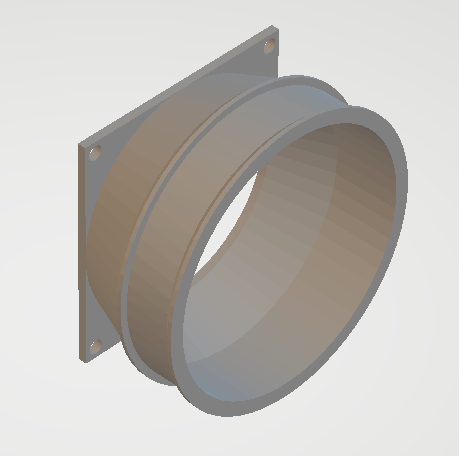 The Aillio Bullet R1 User Group is a place for users of the new Bullet R1 to discuss, share, and celebrate our experiences. It is not a general roasting forum, but is specific for owners of the...

I deleted my FB account many months ago now, so won’t be going there in future!

A 3D file of the exact fit would be great to have if anyone has one, please?

I’ve got one ordered!

There you go! Forgot that Aillio later made those three parts available

It is a 24V DC fan with PWM input. If you know what you are doing you can design an interface to another motor but do not overload the 24V line or the PWM line as you could damage the induction module. You will want to use some kind of isolation circuit as well.

Other way around. It pulls air through the beans and exhausts. Cooling performance would be comparable either way, but your suggestion would put chaff all over the place, there’s a chaff filter just before the fan exhaust in the cooling tray to catch it.

As an aside, the cooling tray fan doesn’t shut off at any time except OFF mode. The fan keeps a steady air flow beneath the Bullet (about C2 perhaps?) when it’s not cooling.

Something to consider when setting up a roasting space: some owners add ducting to get the smoke out but that’s only part of the job. You also have to gather smoke from the cooling tray. So if you dig through some of the older posts here about ‘roasting setup’ pay attention to those that have allowed for exhausting the cooling tray too. I didn’t go that far and should have. If you roast under a range hood all you can do is hope air drafts catch the cooling tray junk (smoke, roasting smells, oil particles) as well as the roaster exhaust. The Bullet can move a lot of air!

Thanks for your quick reply. I’ll be in the shed tomorrow connecting ductwork.

Thanks Bruce. Appreciate your quick reply.