I’ve been roasting on the bullet for a year and a half.
By now, I can say that achieving a light roast is very very challenging on the bullet, at least for me.
I either get grassy undeveloped flavors, baked, or over-developed roasts.
I could never reach the juicy sweet roasts that I aimed for.

Searching this topic yielded results of users frustrated by the limited convective heating of the bullet.

Now, I tend to believe that while the bullet is behaving differently than other roasters like Loring and Giesen there must be some kind of technique to achieving this goal.

Just to summarize what I understood while searching:

Thanks in advance all,
Jonathan

I feel your pain, even with a 1 kg double wall commercial gas drum it is not much different. After many years it appears to me that the “window” for this optimal light roast development is incredibly tiny on small batch roasters, particularly single pass drums. Conversely, when you look at the huge increase in mass of 30kg batch in say a Loring with its closed loop system, it actually doesn’t need that much air volume moving through the mass to to get the high levels of convection heating. Coupled with a small responsive probe buried in the heart of that mass makes this “window” much larger.

So with the Bullet we can do a few things to increase convection heating. 35 - 50% batch size using the highest drum speed 70+ rpm.
This results in the bean mass “breaking up” and not sitting in a pile on hot thin metal. This broken mass falls through the hot air inside drum, which is convection heating. It may be different (less efficient?)from closed loop “forced convection” heating but plenty of convection heating is happening.

The first problem is that this broken mass gives much less reliable temperature readings from probes, this is where the IBTS may be much more useful later stages of roast.

I think the main problem is what you touch on in that the roaster draws in ambient air, which is subject to all sorts of seasonal variations. Added to this, is that often the airflow setting to remove all the chaff in a small drum is moving too fast for proper heating of that air and we get the cooling effect you mentioned. This results in some seriously thin grassy soup in light roasts and stinky baked vegetables in darker roasts or we end up with burning chaff on very low airflow to maximise heating of the air?

I will be sticking with 500g for light roast experiments into future. I think anymore than F3 is not doing anything good.

Im guessing many people will disagree with what I have written and thats fine, these are just what I have observed over many years.

Do you have any profiles of good roasts you were able to achieve?

Sorry I do not, still very much trying to figure it out. I regularly trawl the roast logs searching specific batch size and roast level, trying other people’s roasts here and there and using that to inform future experiments.

If anyone works out how to roast a clean, light and aromatic roast similar to TW for example please share it here.

Take a look at this post.… maybe a possible starting point? Just a wild lead

Well, I hope someone who mastered it by now can share his/her practices and knowledge.

Since I may have the beans roasted on 6/14, It sounds fun to compare yours with mine…even though the spell is a bit different than yours with “Idido” and it is a Honey Process one.

My FC IBTS is @ 200.8C which is very much the same as yours. But the common stopped here. My end IBTS @ 200.4C and the delta is -0.4C with the total development time of 0:51…The Agtron reading is 86 which means it is still a bit dark to my very light roasting target of Agtron 90~100
But since the final taste is good enough so I did not make any change to the profile.

I had experience roasting grind Agtron of 130 which I called it the extreme light one and I have to drop the beans right after/before the FC (~10 sec.) and it taste extraordinary.

What I am trying to say here is the Bullet is very capable of handling very light to extremely light (nordic type) roast with many success in my case.

Hey Fred,
Thanks for commenting,
Could you share the profile that you are referring to?

Pretty sure this is the one Roast World - Cup, grade and analyze your roasts in depth

I have saved a couple of others and washed Eth after looking through Freds roasts. Thanks Fred

Here is the one I was referring to

Thanks! Yes, pretty close and I have roasted a couple of batches using the same profile.

Thanks, I’m trying to open the links but it says the roasts are not available. Did you use the “share” option from the “actions” drop down menu?

If no that might be the reason because when you are logged in and just copy the address or use the browser “share” it gives a link that only you are able to access.

A few more questions just to make sure we’re talking apples to apples.

• Do you use the calibrated fan settings or the uncalibrated ones?
• What kind of exhaust solution are you using ?
• Are you located about sea level or higher?

These are very important because all affect the airflow fundamentaly.

Thanks for taking the time to reply,
Jonathan

Here is the shared link with Agtron 86

Here is another one with Agtron 89

Unfortunately, I am not able to access these roasts, either. The message I get is:

The link you followed may be broken or the roast might have been removed.

Morten Munchow runs through a Nordic Roast on the Bullet in his Roast Profile Design Basics Course. He preheats for 30 minutes with a preheat temp of 310 C. He starts at P9 and at 150 C goes down to P8. At 206 C he goes down to P7. It is hard to see in the video, but it looks like he has drum speed at the highest setting and fan around 2 or 3. No changes to those throughout the roast. He dropped at 220 C IBTS or 224 bean temp. First crack at 9:24 with 3 minutes development time. Due to the importance of roast color, he uses a color sample from a prior roast to match samples to determine when to drop.

This is interesting… if a “Nordic Roast” is supposed to be a label for a light roast, somehow that drop temp of 220C / 428F IBTS doesn’t seem to be light IMHO. I just roasted this weekend and I drop at 425F IBTS and RoastVision gives me a reading of around 15 which is Medium Dark. I roast 1kg batches so the BT and IBTS at that time is very close readings.

@toddjohnson.LLAn
220c and 3 minutes development is not a Nordic roast

Rewatching the video, he calls it a Scandinavian roast. I just double checked the temps and times and they are all as I wrote above. The coffee looks quite light. The beans in the center are the reference roast. The last group in the upper right is the last sample he pulled just before he dropped. I’ve been curious about Nordic roasts, so I’d like to know what others are doing. I don’t know if Morten is on here, but I will write him to ask about the end color. He seems to use Agtron ground as his target, not whole,but he uses this tray (that they sell) during the roast. 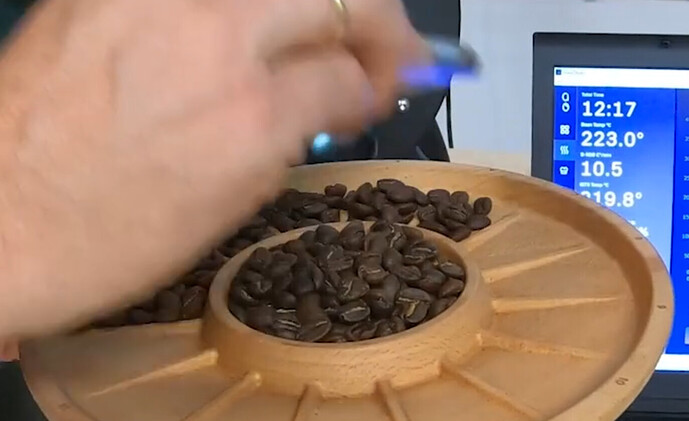 No idea what is considered “Scandinavian roast”…

Photos of beans can be misleading due to ambient lighting etc. At face value from what I see in that photo/screen shot (I assume it is a screen shot from the video course), it’s looks to be a medium roast. It doesn’t look like a dark roast (what I would consider second crack and beyond) as I am not seeing the tell-tail oily sheen. RoastVision (aka EspressoVision) has a conversion chart to Agtron here - it would be interesting to know if you hear back from him on what his end color Agtron reading was.

I see you put Agtron scores in the title, but how do you find those scores in the actual Roast? I’m used to Artisan where they are part of Roast Properties.