It has been a long time since I was here and there are many roasts on my now 9-mo old Bullet. One of the things that many Bullet owners have endured is the motor noise that comes from belt tension on the Drive Motor. Tom at Sweet Marias has mentioned it in his Bullet videos and IIRC, the Aillio brothers have also noted it here. It has always bothered me listening to that baseline sound because it sounds like something chafing at the rear of the Bullet. Recently it also got a lot worse and I knew I had to investigate.

So, today I removed both rear panels to access the motor and check things out. Basically, it appears the new (more bothersome) noise in the motor area is coming from the metal Belt Pully that attaches to the motor. That Belt Pully and the head of the set screw that holds it in place have been making contact with the adjacent surface on the Bullet. Here’s a pic of what I observed after removing the motor. In the photo, you can see where the pully has been scoring the surface that it was contacting. 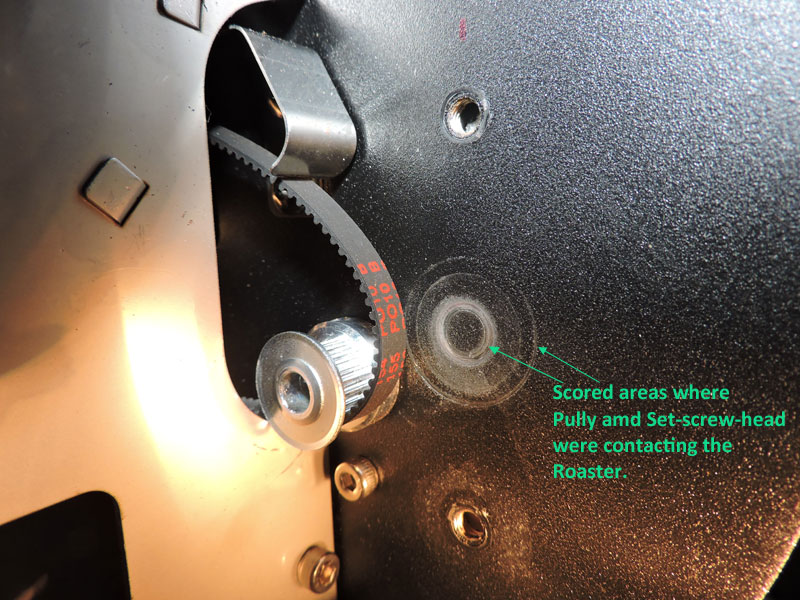 That wasn’t difficult to address with a very slight repositioning of the pully (and set screw) on the motor shaft. But that motor noise the Bullet makes from the belt tension effect on the motor remained. So, I decided to tinker with that one. I loosened the two motor mounting screws and quickly discovered that removing some of the tension on the motor eliminates that chafing motor noise that I’ve heard since I bought the Bullet.

The problem with changing the belt tension on the Bullet is that the motor mount-design doesn’t really allow for it to stay put. That is because of the smooth rubber washers used to contact another smooth surface on the Bullet’s frame. There isn’t anything that properly holds the Motor Mount’s position. If you try to adjust it (and secure it in a new place) the whole mount just slides back to where the chafing noise returns. It would be like trying to set belt tension on an automobile alternator without having a positive hold on the mounting bracket when tightened.

I found (and followed) a post from Jacob that suggests heating the rubber washers to improve grip. It made no difference in my case, but was worth a try. I’ve shared photos of the washers below (before and after).
Improving the rubber friction so your belt will not come loose 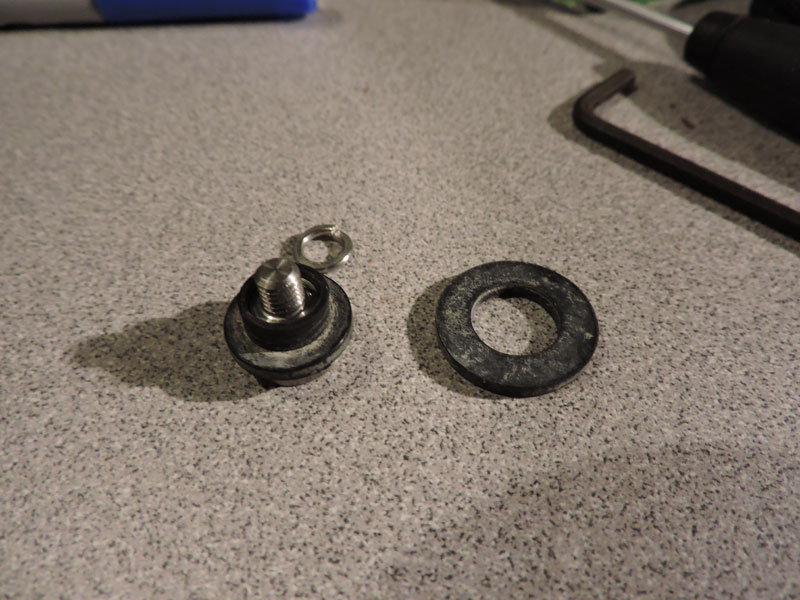 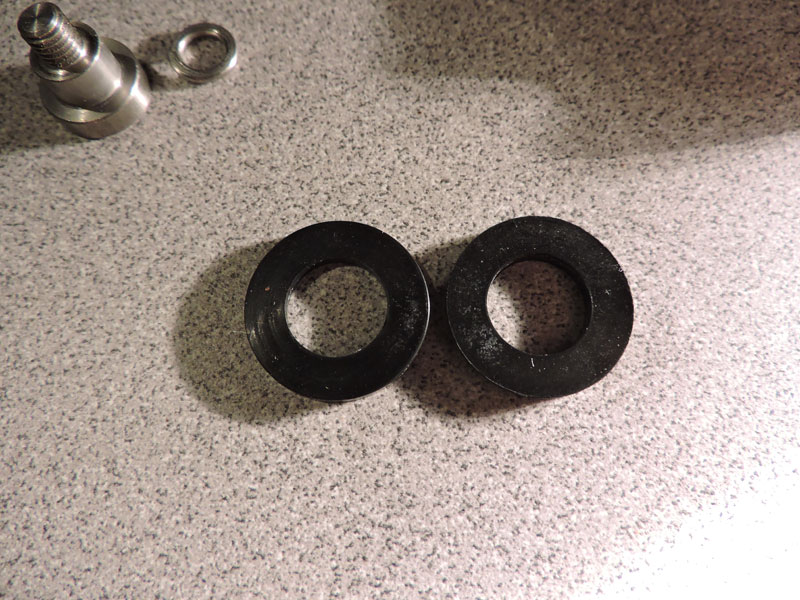 The only other thing I found was to reduce the force from the Motor Mount Spring upon the Motor Mount. So, I applied some back-pressure to the spring so that it wasn’t pushing so hard against the Motor Mount. That helped with the noise and I’m hoping that the belt will still have enough tension to avoid jumping teeth. I think that it looks and feels OK, but a load of beans run through will be the best test. 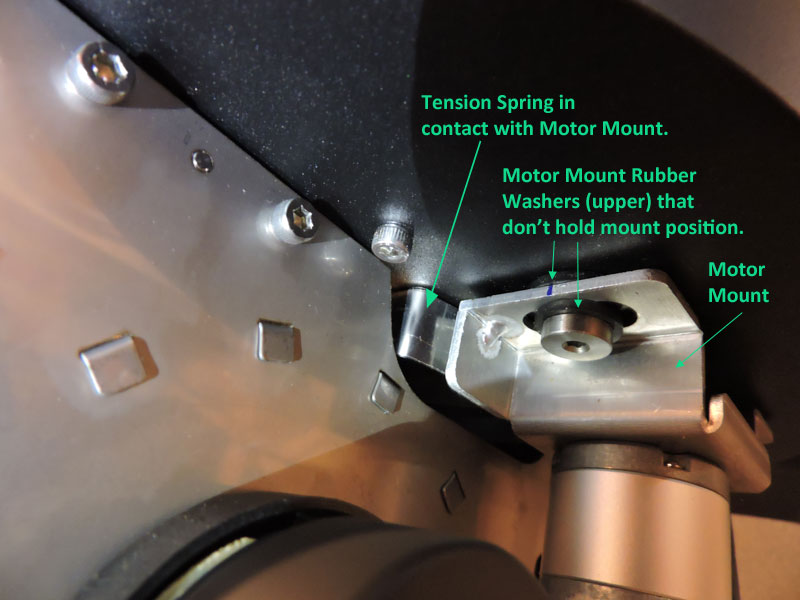 If anyone else has found a better solution, I’m all ears…

Hi Jacob and thanks for that thought on the gearbox. Right now, I have the motor purring quietly by relieving the side pressure (tension) on the gear-motor. But, that may create another problem (belt not tight enough) that would cause me to have to reapply that pressure. If I have to address that problem, I’ll take the opportunity to give your gearbox rotation a try. If the gearbox is “planetary”, I wouldn’t think rotating it would make any difference, but I haven’t had it apart to know.

I have some experience using gear-motors with coffee roasters and they are a great choice. They can produce noise under certain circumstances and load setups. So, I do understand that zero motor-noise with gear-motors can be a challenge for anyone using them.

My Bullet is identical in gear-motor noise to what Joshua Armour shared in his videos that recorded the sound. If I relieve the side pressure on the motor, I get the same very quiet situation that Joshua recorded in his video.

I also re-read your comments in that same thread, appreciate that you folks understand that sound and that it is currently not solvable from your end. I’d also like to say that my Bullet is performing very well in all other respects which speaks well to your design.

Having built a coffee roaster of my own design in the past, I can appreciate that the Bullet’s gear-motor noise can be affected by a side load. In my own design, I had the gear-motor direct driving (in-line) with the drum. Side loading the motors produced more motor noise that an in-line drive in my tests. That doesn’t mean that your design will cause any problem either. One thing that I appreciate about gear-motors is that well-designed ones are tough as nails. I went through more than one over the years of using my roaster (which still works today). I hope that you guys can find a solution to the motor noise and wish you the best with the remarkable ability of the Bullet.

You’re welcome. I was thinking that it may help a fellow Bullet user if they encounter this situation. I’ve benefited from other’s posts here and help (many times).

I have been studying this problem as well. I reduced the spring tension and that helped a lot with the noise. But, like you I am concerned that the belt might skip. I did some research, and normally a cog belt like this is tensioned with an idler pulley, not spring tension on the motor. I have discussed this a bit with Aillio as well. I think a proper belt tension arm might be the correct solution for this. I am going to try to fabricate one if I can figure out how…

Since relieving the spring tension on the motor mount, I’ve done (4) back-to-back 1lb roasts on my Bullet. There was no belt slippage (yet) and the roasts completed normally. The absence of the gear-motor noise throughout the roast was most welcome. It is still possible that a full load of 2.2lbs may behave differently regarding belt slippage. I don’t do individual roasts that large, so that scenario is not yet tested after lightening the spring tension.

The belt is noticeably less taught when feeling it with a tool and visually it is tracking fine when in use (under no load or under a 1lb load). I too feel that there is a solution and the idler pulley may be helpful. The main thing is to relieve that strong lateral pressure off the gear-motor that is causing the noise IMO. If you find a good solution that maintains proper tension and removes the noise, I’d love to hear about it.

Apologies for resurrecting… I just got a new Bullet Dec 2021 though mfg date was 8/21. Have this exact same issue. I was going to contact SweetMarias about it since I bought it from them. My first thought was “this can’t be right” - it just sounds like something is wrong with it. But am I to believe that to some extent all new Bullets (with the spring tensioner) have this type of noise?

It’s possible that it’s better when the unit is fully loaded with the noise from the beans tumbling it’s hard to really tell. I am a little worried about longevity based on the noise I’m hearing.

Possible to record the sound and attach it?
Have you followed the pre-inspection / setup guide lines and checked the drum, pulley, shims etc? If the box was dropped during shipping then you may need to loosen the big pulley on the drum and pull the drum forward.

Replied via PM with link for vid/audio. Thank you so much Jacob.

Hi Niko,
I saw your video, thanks. I don’t think there is anything wrong with it, but if you could post it publicly so others can give their feedback that would be appreciated.

Hey All. Attaching google drive link in case anyone would like to listen or comment. I did complete all the check list items and everything seems to be in proper order in terms of drum and pulley wheel alignment. This is a recent generation with the spring tension device. Any thoughts from the group appreciated.