Yeah, I confirmed. It’s the new 606 Beta firmware with the fan going to keep the BT down. Switched back to 605, and no issues.

When trying out RT4 make sure to let it update after installation. You will see some notifications about updates are ready to install. It is important to then restart the app.
New features coming out this week. Stay tuned.

Thank you for RoasTime4
sorry guys i have to write this in chinese because my english is not that good, so i can explain this propperly

There are still some blank translations in the software, but I believe it will be perfected before the official version is released.

Roastime has been very good and can continue to evolve and update, thank you for your efforts. awesome!

Thank you @jacob & team - the current roast name on the top left is immensely useful and much appreciated. Also the paste last roast button along with the confirmation/information box works flawlessly now.

Thank you so mush

Noticed my first weird issue in RT 4. I don’t use a lot of the features except roasting, so I’m probably dodging some haha.

Scenario. Win10 Laptop turned on from standby, RT4 still running from last session (usually no issues), Roaster plugged into laptop, then turned on and set to preheat.

When it was ready to charge, I got my beans and put them in, then started the roast (not looking at RT4 until about 5min into the roast. ~5min in, look at RT4, notice it’s frozen from a prior roast (shows connected but not showing the roast)Restarted RT4, and the Elapsed time was correct showing ~14min then as I clicked the F1 to annotate FC, FCE, and SC all of those datapoints were showing up as if the roast didn’t start until after I restarted the roast. I.e. FC hit at ~10min elapsed, but the market shows up at the ~5min mark. So it’s marking FC at the time the program’s been open, not the actual elapsed roast time. 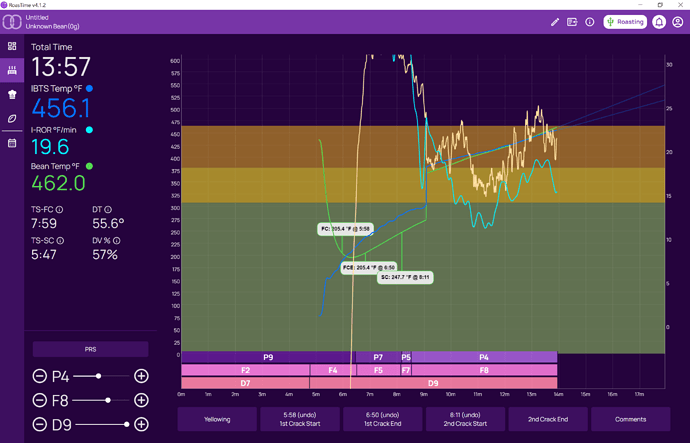 Thanks for the report, @prehistoricperk. We’re aware of this issue and are tracking it internally. I’ll write back here when we’re gotten it fixed.