I put this in ‘taking care of the bullet r1’ because I don’t think it’s the machines fault. I think I need to know how to service thermal probe.

Last two roasts, the IBTS raises normally, and steadily but part of the way through the roast my thermal sensor starts going crazy, and the rate of rise is then going wonky, but the IBTS just trudges along normally as though nothing is up.

I think it may be right around the time that I turn up the drum speed, or turn up the fan that it happens. However don’t be fooled, its not like the wonkiness is just that the beans started to cool and there is a slight dip, its that suddenly I went from RoR of like 10 to -90 then less than a second later its showing +80 then -45…

I think maybe the sensor is not reading right, maybe the cable is crimped or getting feedback. Something.

Note the roast curves are not showing up in roast.world either.

I have updated the latest version of roasttime but when this is happening the machine is also showing the crazy fluctuations. Also the roaster is on the beta firmware that has been published for a while because I have the new fan that requires it.

I think a couple of other folks have mentioned things to check when the iBTS freaks out - what are the RPMS showing in RoasTime ? Do they madly fluctuate ? I think Matt from Aillio said they want to know about fan failures in the IBTS. Also have you eyeballed the IBTS fan to see if it’s got dusted up ? Or even someone said they found a bean lodged in the IBTS window…

Those sound like things to check before moving on to the wiring…but as Sherlock Holmes said, eliminate the impossible step by step…

The IBTS is rock solid, no fluctuation. It’s the Thermal probe that is going wonky. Is there a fan for that or some sort of cooling method besides the fan for the entire machine dedicated to that one? 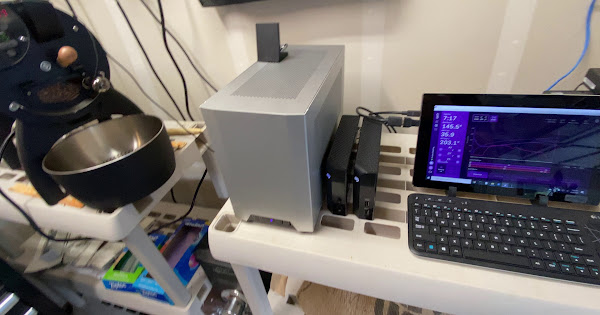 Sorry, I misread your post about which sensor. I have seen posts from @jacob in the past indicating you may have a short in the “old style” probe, which as you say is used to derive the RoR. The only way to get RoR derived from the IBTS with the Bullet currently is to switch to Artisan, although I find the IBTS too jittery to be useful which is why doubtless it hasn’t appeared yet as an option in RoasTime.

The Artisan folks suggest unplugging the laptop from mains power during roast sessions unless you have a USB isolator. It might be worth a shot as a hardware vs. software troubleshooting step.

Have a look for some of the other posts around “probe short” and see if they help you out.

“I think there is a periodic electrical connection between the bean probe and the chassis.
This normally happens if the wires to the bean probe that runs between the outside (aluminum) and inside (stainless steel) plates squeezes the probe wires.
You will need to take out the the buttons / control board module and then remove the front plate. Unscrew the inside plate and check that the wires from the probe are not squeezed and that they are running in the groove.
If this does not make any sense please contact Aillio to see if they have a guide - but it should be pretty straight forward.”

There’s nothing wrong with the RoR display. The issue is the Bean Temp data that originates from the thermocouple (the probe beside the exit door). Any variation in Bean Temp that isn’t a smooth, steady line converts to gigantic swings in RoR. I had this pop up once but it hasn’t recurred. Looks like you weren’t so lucky. I’d get something started with Aillio Support in case they have a procedure for checking the failure.

Stuart has the right info for you. You’re looking for 2 light blue wires (very small wire gauge) that are routed between the inside stainless plate (faces the drum) and the black front plate, then through a hole in the black front plate and up through the pedestal for the Control Panel. I worry about the insulation getting hot and compressing between the 2 plates, but maybe it’s some magic material that isn’t phased by high temps and pressure from being squeezed between the 2 plates.

In general, thermocouples are really durable. If one failed I’d find it surprising. To me the wires are probably the weak element.

I did a pretty good cleaning, per Julio’s suggestion at Sweet Maria’s, and it appears to be working better! 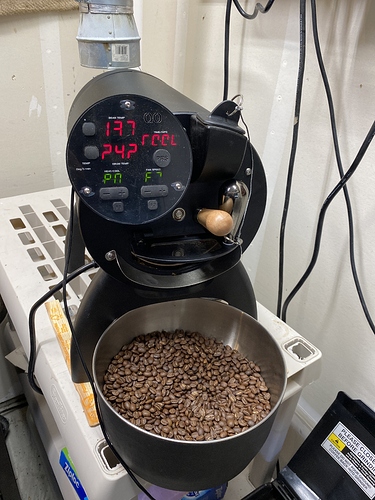 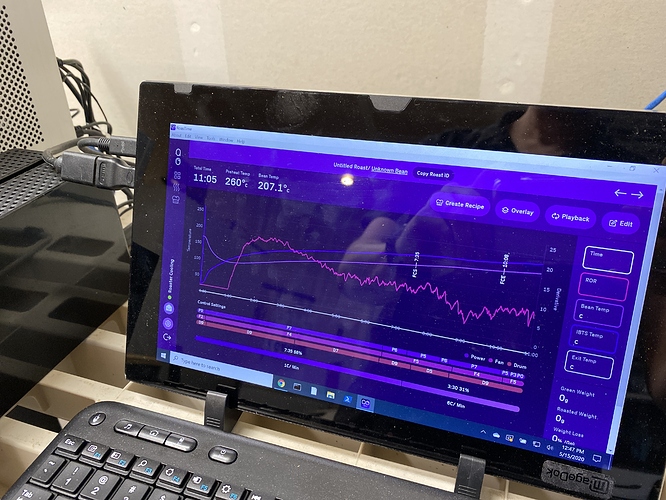 Now that I think about it, I cleaned the front of the roaster after the single occurrence of the weird RoR/Bean Temp event just because it was time. I haven’t seen it again. I have a hard time believing the 2 things are related, but now I have to wonder! (Too coincidental for my comfort zone.)

During preheat my machine was going from preheating to roasting without me dumping the beans or hitting the button. It would say “charge” and a second later just saying “roasting”. I tried to get it back to pre-heat a couple time when that happened but it would just blow through to roasting less than a second after ‘charge’.

Then I just said f’ it and roasted a batch anyways.

The resulting chart was wonky, with the bean temp dropping or dipping a few time, with the IBTS consistently rising. 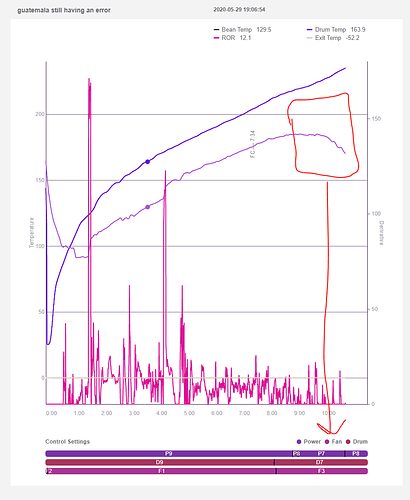 Check it out, at the beginning and then again at 1:59 seconds into the video.

From the spikes in RoR I’d suspect the thermocouple probe being intermittent. The cleaning may have disturbed the fault for awhile, but it looks to me like it’s back.

No idea why your power → P0 during the roast (I’ve have a similar unresolved issue; an alarm sounds at the time I get P0, but no code).

i have the same issue. I replace the bean probe last week and will test it tomorrow. I also made sure the IBTS was super clean. I will let yiou know how it goes tomorrow. but I’ve been dealing with this for some time now. they sent me a free probe, because support thought it might have burnt residue on it. sure enough, there was some on the old probe that would come off unless I scrubed it was something abrasive or harsh chemicals.

I too started having this issue a few roasts ago.
I was about to take it apart and clean it (time anyway) but I am now doubtful that will fix. I will also check the wires while there

What is the solution? I new bean temp probe?

replacing the bean probe fixed that issue with me. I now clean the IBTS every 12 to 15 roasts. Roaster is running good now. now complaints at this time.