Words of advice on upgrading v1.5 to v2?

I’m ordering the v2 upgrade kit for my 110V Bullet today, and was curious to hear from owners who’ve done the conversion already.

I’ve looked over the upgrade walkthrough briefly and the procedure looks pretty straightforward. Does the kit come with printed instructions showing the wire color:pin assignments for the connector modification? Do you have any other bits of wisdom gleaned from your upgrade experience?

Did you manage to order an upgrade kit because when I inquired a while age they told me there was no upgrade kit at that time. I did inquire about 3 weeks ago once more and it has been crickets since then, no response whatsoever.
Thanks, Steve.

Are you in the US? If so, check with Julio at Sweet Maria’s about preordering.

Where did you find the upgrade walkthrough? I don’t have the kit for my v1.5 but I was curious whether the upgrade from v1.5 is the same as the upgrade from v1 shown in this video: Aillio Bullet - V2 Upgrade - YouTube. If it is, I would probably want to make the process reversible (using short patch cables instead of pulling pins and cutting wires) just in case I ever needed to go back to v1.5.

Yes, that’s the walkthrough video that I watched.

I stewed about never, ever being able to go back to V1.5 after the upgrade (without replacing the wire harness), but in hindsight I can’t imagine why I would want to reverse tthe upgrade… “just move forward from V2”. That said it took a good 10 minutes with the wire cutters in my hand to finally tighten my grip and cut the &^%$ wires! Scarey. Either way you do it just make sure you cut the right wires.

Haha, I’m getting serious bomb squad images there! Thanks for the feedback; I’d recalled that you had already done the upgrade and was curious whether you’d hit any snags.

No issues at all. I replaced the control board at the same time as I had an issue with an intermittent alarm and it wasn’t clear where the issue was. There’s always a concern making 2 big swaps simultaneously but it went well. The instructions were very clear. To be honest I can’t recall if I received written instructions or had a video but whichever, it was very well presented. The laptop I had then has since died so I don’t have any record other than the posts here from about mid-2020.

Take photos as you go to get connector orientation and location right when you button up. And to confirm wire colors. I stumbled a bit with the control board but you won’t have to deal with that (?). The photos saved the day. It took very little time to complete the install.

My roasts seem to have a tag somewhere indicating I have a V2 roaster now (probably from the power board… ??). And the older profiles say V1.5. I saw essentially no difference in roast profiles but that probably has more to do with the relatively low preheat setting I use. If you’re roasting large batches I imagine you’ll see some difference.

Circling back on this, the upgrade arrived Monday and really it was a piece of cake to install. My notes, for someone like myself who doesn’t tinker with things all the time, were:

I had 1 lb of the coffee used on my last v1.5 roast so I went with that for the test roast. It’s not a well controlled experiment but it seemed there was a marked difference between the two roasts (attached with the 1.5 roast as an overlay). 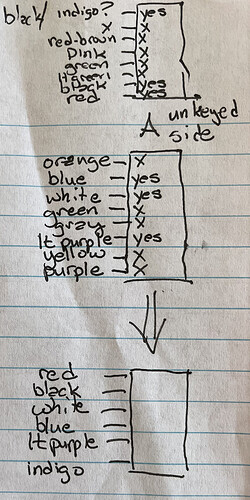 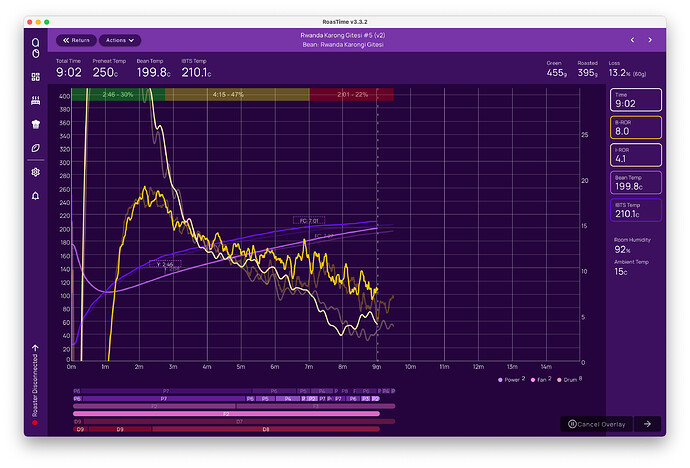 Thanks for that. Do you think it was worth it or is it too soon to tell?
For me, in Canada, it would be $792 plus shipping that’s a 150lb bag of very good beans.
Thanks. Steve,

Good question. Since I’m only a hobby roaster I’m sure it’ll never be economically worth it, but the original purchase of the Bullet was never justifiable on that basis either.

I consider it money well spent precisely because it is one of my pastimes, and I’d categorize it like buying a set of boutique tubes to swap into an amp if I were an audio geek, or a fancypants carbon wheelset if I were a devoted recreational road cyclist.

Extrapolating from a sample size of one is foolhardy but combined with the anecdotal reports of others I believe that the upgrade will definitely help you if you’re using your Bullet as a small shop roaster for 1kg batches. I’ve tended to use P7-P8 and PH 250 as the nominal settings for most of my 1lb roasting, so it always seemed that while the roaster could get 1kg roasts across the line, there’d be considerably less flexibility in how you could manipulate profiles due to the lack of headroom.

Great Thanks, John.
Yes, it has helped all data helps. I started as a hobby also but when I got the bullet I gave some coffee to neighbors and one thing led to another.