Any chance of an ARM/Linux build?

This really feels like a job for a pi with a touch screen.

Easiest might be sticking with 64 bit ubuntu on a pi 4, though raspian/32bit would probably allow wider use.

I think my backup plan is a rock pi using an atom.

I posted about this and Matthew @ Aillio (programmer) stated he has ARM on his list, but just hasn’t gotten to it yet, but looking forward to it. I think a Pi4 4GB or 8GB would rock for this. I’d just use a 14" LCD I have from the past, that would work well and of course the best recycling is repurposing

Well, if someone manages to run it on Pi4 - please do share

Yessir! I look forward to the day

Roastime on a pi 4? Software

I am considering downsizing my garage computer to a pi 4 since they are beefier and small. Anyone running the bullet software on a pi4?

And another from the distant past-

Hi all, I’ve been working on this project on and off for a long time now; Constantly changing directions. Basically, i’m working on replacing the control panel with a Raspberry Pi that allows you to control the bullet (Both via touch screen and Xbox controller), display graphs and store/send roast profiles to Roast World. I’ve designed some 3D models to allow the RaspberryPi case to fit on top of the existing control panel for easy detachment in case of RPi failure. I’ve developed a C++ librar…

I’d second (or third) that notion!

I did try installing Raspberry OS on an old 2013 MacBook Air, which ran well. Unfortunately, I couldn’t get Roast Time to load. Maybe it has to be running on Ubuntu.

UPDATE: just checked the download page and it is a 64bit but I’m pretty sure Raspberry OS is 32bit for now, even on an Intel based machine.

I also think an iOS version would be fantastic and it feels like iPads and the OS are beginning to really make the right steps towards being truly useful.

I definitely would run Unbuntu. So if you’re in the mood for experimenting, that’s where I would think you’d see success.

As an update, I wiped my MacBook Air (2013) and installed Ubuntu MATE. I chose MATE because I know it’s a lightweight OS and there’s also a version that’s been specifically built for the Raspberry Pi, so I’ll probably install it on the Pi for learning the OS and just ease of moving data around.

After fully updating it, I installed Roast Time v3 and it ran, first time no trouble. I was able to log in and all my roasts started syncing down.

However, it wouldn’t see the machine when I plugged it in, so I look through the forum and found the solution, many thanks to @arolsen who has suggested editing a config file. I restarted, plugged in the Bullet and saw it.

I was then able to control the Bullet as normal, adjusting fans, power and drum speed from the app. It also read the sensors and started plotting the chart.

I guess this means that any old PC or Mac that can install a 64bit OS run Roast Time and Ubuntu MATE is perfect for this. 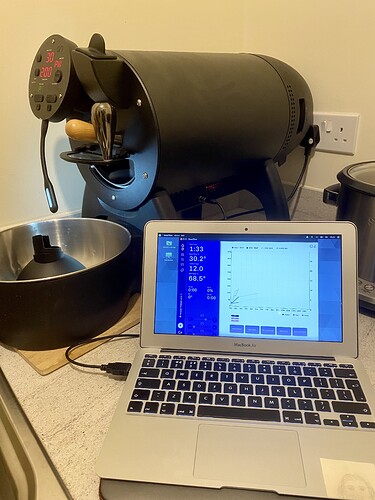 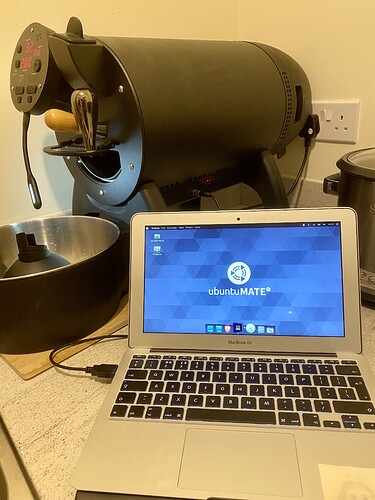 +1, I’d love an ARM build for hooking up my Pinebook Pro or building a dedicated touchscreen setup with a Rock64

It is something Matthew is working on. Let us know if you want to be an early tester.

I would also love to be an early tester for an ARM build. Happy to dedicate a Raspberry Pi to the job and test several different OSs if it’s useful.

Thanks guys, Matthew is testing a version for Raspberry Pi, which might come out next week.

I would also be interested in testing it! I’m currently running RoasTime in a Windows 10 VM on Fedora 34 on an x86-64 system, which is resource-intensive and does not always work that well. Running v2.x sortof worked in Fedora, but often froze up. v3 so far does not work at all in Fedora.

@s1fly @cathos @bobstrenger @jared @jpower2dzfl
We have our first arm debian build ready for very early testers.
If you are familiar with Linux and want to help us test this then please join our slack channel to get access and discuss.

Slack is a new way to communicate with your team. It’s faster, better organized, and more secure than email.