This is a thread for discussing the new beta of Roast.World @ roast.world , which is designed for use with the new RoasTime 3. Please read through this post before you upgrade to RoasTime 3.

IF YOU DO NOT FIRST DOWNLOAD AND USE THE LATEST VERSION OF RT2 TO CREATE A BACKUP OF YOUR RECIPES, YOU MAY LOSE THOSE RECIPES FOREVER WHEN YOU UPGRADE TO RT3

Things you need to know before you begin using RoasTime 3 and Roast.World

YOU MUST FIRST DOWNLOAD AND USE THE LATEST VERSION OF RT2 FROM THE LINKS BELOW TO CREATE A BACKUP OF YOUR RECIPES, OR YOU MAY LOSE THOSE RECIPES FOREVER

How to Upgrade (Important!)

To back up your recipes and begin using RoasTime 3 withRoast.World you must follow three steps . It will only take a few minutes. (If you do not use recipes and all of your roasts are visible on roast.world then you can skip the first two steps.)

So What’s Different in RT3?

In developing RT3, the initial primary focus has been performance and usability . That means the feel is exactly the same as RT2 – you will not need to re-learn anything. But on the backend, there has been a lot of effort put into making this version of RoasTime the most stable ever.

It will also be far easier to implement new features – eventually including some related to machine learning and integrations with other roasters/platforms. You will already notice one new feature, however. RT3 uses RoR calculations to help predict your roast curves mid-roast.

You can read more about RoasTime 3 at roastime.aillio.com under the “Documentation” menu.

So What’s Different in the New Roast.World?

The new Roast.World has a different look – less purple. There are a lot of back end functionality tweaks to make things snappier. And because it is built using React – a much more modern and robust framework than Ruby on Rails – new features will be far easier to implement, just like with RoasTime 3.

(Please note that although you can sync your recipes with the new Roast.World, you cannot yet view them on the platform, or download recipes from others. These features and also the Roast Analyzer are coming soon!)

Please share any questions or feedback about the Roast.World with our coders here in this thread. There is a separate thread for RT3 here. (Though there may be some overlap between the two discussions.) Thanks!

After a quick walk through, I think it looks real good. A few comments:

“My Beans” - Thanks for adding the “Date” field for the date I added beans to my inventory. I also like the ability to filter for a bean origin to more quickly find a bean, or search using just one word, like “Guji” to find all with that word.

“Find Beans” - I did not see a way to pull up other users’ roasting profiles while looking at a bean, like existed in the old RW.

I look forward to roasting with RT3 and using the new RW.

I have gone through a RoasTime v2.2.0 → v2.5.7 (backup) → v3.0.71 update process. Now all my roasts seem to appear on beta.roast.world, but when I click one of them it is empty. No graph shown and all listed values are zero.
Also, I do not see the “upload backup from RT2” option within RoasTime v3.0.71, as shown in the video.

Some of my recent profiles are missing. How do I restore them from the backup done earlier - the .json files in the back up directory?

I am currently using Artisan with my Bullet, which is a finicky pain to setup, but stable once working. I’m concerned that upgrading to RT3 will reset my USB settings and make Artisan unusable again. will that be the case?

The details of my roasts have now become available in beta.roast.world.

It will overwrite your old drivers, but if you want to go back to artisan you can just un-install and delete the driver and it should default back to the old driver (which you don’t need to install again)

Additionally, the roast count for a bean seems to be fluctuating up and down by 1 or 2.

@jerry I’m seeing something similar on my Win10 system. RT3 has some roasts that say Unknown Bean while others that used the same bean still look correct. R.W is more consistent about a specific bean being Unknown Bean. Inconsistent between RT3 & R.W.

@bab Same here about the inconsistency between RT3 and RW. Everything looks fine there, but I cannot manage the beans there. This whole thing started because I was not seeing the weight in stock and the weight roasted line up. I’ve kind of given up on that until I can get the Beans to show up correctly.

Hi Jerry, you’re right. I can confirm that this is acting up. Thank you for writing. I’ll get this fixed.

Same thing here. Backed up my recipes with v2.5.7 and installed v3.0.71. No option at all to import my backed up recipes.

Also my AV program, AVG, flags RoasTime as malware and quarantines the .exe and .lnk files. I restored them but thought it was worth letting people know.

Are there any plans to implement a real roast/recipe search?

Thanks @derrxb! Let me know when it’s fixed and I’ll confirm.

Hi, this is fixed now.

Let me know if it works on your end.

Thanks for the feedback! Seeing other roasts users do with a bean is on the roadmap to bring into the new Roast.World. However, we’re trying to get a few things finished before we implement this. It should be here soon though.

@derrxb, I can see the beans now, but my woes continue. When I tried to add a vendor so I could add a bean, I got an error. Screen shot: 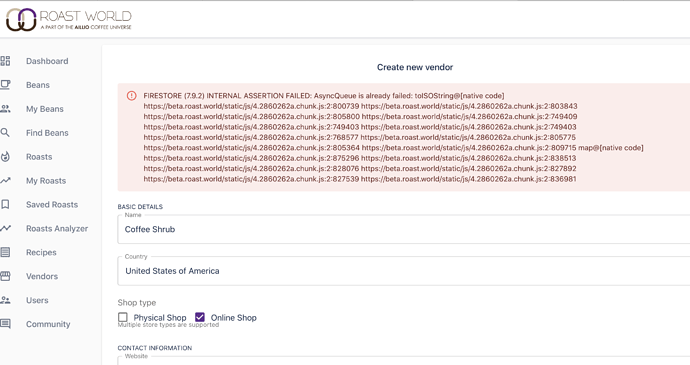 A couple of things I noticed:

All my roasts and their data showed up in the new Roast.World as I’d have expected (that I can see–I admit I didn’t go back through all hundred-or-so.) But, the last session or two before I became aware of the migration and the first set of roasts I did post-migration (and post-RT3 update) don’t seem to have updated my bean inventory. At this point it’s a minor annoyance and I can live with it in the short term, but I’d love to get back “in sync” soon. Any ideas (other than zeroing out the beans I’m out of now, and accepting my “times roasted” count is going to be off?

Hey Jerry, I’m happy to hear that the beans stuff got sorted out.

I’ll look at the vendor creation error and get that fixed asap. Thanks for pointing that out and I’m sorry for any inconveniences caused. I’ll let you know once it’s fixed

Can you zero out the beans for now? I’ve already implemented the inventory management feature and this should be live in a day or two. There are just a few tidbits I want to complete before.