Now I can login, but the “RoasTime v3 is Here!” window that should appear according to the video only has “guest” credentials instead of a “submit” button. Then, when I enter my username/password to migrate my data, I get an error message that says that email is owned by a user, and password doesn’t match. 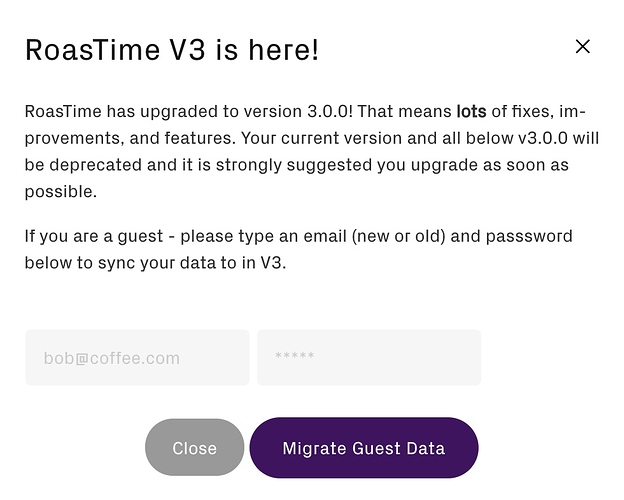 On the Recipe import from RT 2.5.7 to RT3, I still don’t have the link to click in RT3 to import. Is there another way to import the Recipes. (Thanks for your hard work on this. RT is a great program)

I haven’t received any further instructions…

Can I get you guys to join this slack: https://join.slack.com/t/roastime/shared_invite/zt-h7qicu0g-E_u1DsYGRmLXEQ0czoLweg ? I can help you figure out whats going on a bit quicker from here.

from the email link

I downloaded from the link in the initial email

Thank you. That worked

I just followed instructions precisely, downloaded 2.5.7, created backups, then downloaded RT3 from Aillio website. Note, the file said that it is version 3.0.71. I was expecting an option to upload the recipies that I had just downloaded, but couldn’t. There is no link in my version asking if you want to upload any backups. Specifically, in the how-to video, when the user opens RT3 there is a link in the upper-right corner of the screen. There is no such link in my program, so I can’t upload anything.

For reference, after writing my initial post, I opened up RT3 to look around a bit, changed one of the default colors, changed the default X axis time, opened a couple of old roasts. Then when I hit return, back to front page, all of a sudden the link was there.

So all good now. But had me scared for a moment.

So, just did my first roast with RT3 and having a look. In general, looks great.

One thing that jumps out to me, and which I would suggest as an improvement is to either (1) calibrate the Y-axis gridlines to ROR instead of temperature, or (2) at least give users the option of having those gridlines being calibrated to ROR.

Personally, while the roast is happening, I pay a lot more attention to the ROR curve than the temperature readings. So I would prefer that the grid lines line up with ROR values.

No, the duplicates did not disappear.

Hi I just installed RT3 and my Norton antivirus blocked a Trojan virus attack in the aillio-driver-update.exe file:

You can safely unblock that, there is no virus in that driver installation.

@GStav here is what you are seeing.

OK I just excluded the file from my AV list, much appreciate the quick responses guys

When a new roast is rated, it can be rated from 1-5 stars. However, when looking at the roast history roast ratings only show between 1-4 stars. This is just a little inconsistency that should be easy to remedy.

This worked for me too! I had the exact same problem, and I looked at a roast, changed a default color, and viola! the link appeared. I’m sure others have this same issue,

For anyone else, check out this comment I made: